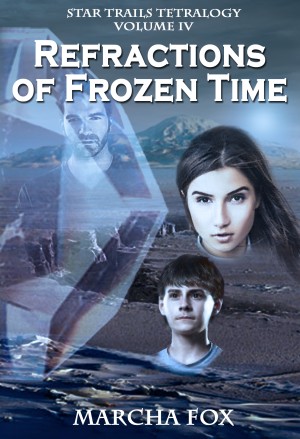 By Marcha Fox
Creena Brightstar believes the cavern's crystals can reunite her family at last. Before she can unlock their timely secrets, however, Integrator forces find their underground hideout, forcing a harrowing escape loaded with unexpected consequences. The lonely days that follow change Dirck forever while ultimately providing the answer. But will it be enough to defeat the enemy's ultimate weapon? More
"Refractions of Frozen Time" finds the Brightstars, your favorite space-faring family, more separated than ever before. Laren is in the process of being exiled to the galaxy's ultimate security prison onboard an automated spacecraft. Creena, her little brother, Deven, and her mother, Sharra, remain in the Caverns, while Dirck and Win report to the Clique base at Apoca Canyon.
Deven discovers a new crystal which, combined with cristobalite, unlocks the portal between Local and Universal time, offering the potential Creena has been looking for to reunite the family at last. There's one problem, however. Teleporting results in the correct location but the arrival time seems to be random, which has risky implications. Before she can unravel the mystery, however, Integrator commandos find their underground hideout, forcing a harrowing escape loaded with unexpected consequences. Believing they're permanently lost, the dark and lonely days that follow change Dirck forever as fate plays out a hand dealt on Earth years before, ultimately revealing the crystals' incredible secret.
Onboard the Bezarna Express, Laren's efforts to exploit the ship's dirty little secret backfire, putting him more at risk than ever before, his survival dependent on ground intervention. Little does he know that the solution has been with him all along, quietly lurking in a device that operates strictly on the principle "If you don't ask, you don't get." Meanwhile, Augustus Troy, Laren's long-time nemesis, gains more power than ever before coupled with being armed with a weapon capable of wiping out anyone opposed to his despotic goals.
Do the Brightstars have what it takes to survive much less prevail at their final confrontation with the Integrator and his evil proponents? Or will the family’s longed-for reunion take place in another dimension of time and space? Find out in this suspense-laden conclusion to the Star Trails Tetralogy.

"Refractions of Frozen Time" Book Trailer
A discovery that links two dimensions of time. A prison ship's dirty little secret. Esheron has answers, but will they arrive before it's forever too late?

About the Series: Star Trails Tetralogy

When Laren Brightstar, the galaxy’s premier terralogist, refuses a job offer from power-hungry despot, Augustus Troy, he knows it makes him a target. Hoping to put as much distance between them as possible, he accepts a prestigious position on a primitive world. While enroute to their new home via starcruiser, his teenage daughter, Creena, is jettisoned in a malfunctioning escape pod. Whether or not it's an accident is questioned when they discover the ship's captain is none other than the infamous Troy. Laren negotiates use of Troy's personal ship so he and his son, Dirck, can go find her but their pursuit further complicates the situation. As the family members left behind, Laren's bondling, Sharra, and their young son, Deven, arrive on Cyraria they find themselves facing a difficult decision which leaves them destitute on a hostile world where the weather alone could kill them. Meanwhile, Laren and Dirck encounter a multitude of hazards and difficulties while Creena is desperately trying to get home again. Thus begins this family saga space adventure where, torn apart by space and time, each member faces hostile forces which threaten to separate them forever.

You have subscribed to alerts for Marcha Fox.