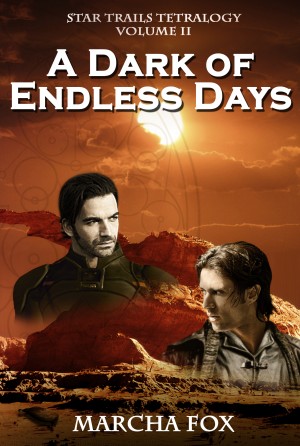 A Dark of Endless Days

"A Dark of Endless Days" Book Trailer
Things are never so bad they can't get worse. For the Brightstars they just did.

About the Series: Star Trails Tetralogy

When Laren Brightstar, the galaxy’s premier terralogist, refuses a job offer from power-hungry despot, Augustus Troy, he knows it makes him a target. Hoping to put as much distance between them as possible, he accepts a prestigious position on a primitive world. While enroute to their new home via starcruiser, his teenage daughter, Creena, is jettisoned in a malfunctioning escape pod. Whether or not it's an accident is questioned when they discover the ship's captain is none other than the infamous Troy. Laren negotiates use of Troy's personal ship so he and his son, Dirck, can go find her but their pursuit further complicates the situation. As the family members left behind, Laren's bondling, Sharra, and their young son, Deven, arrive on Cyraria they find themselves facing a difficult decision which leaves them destitute on a hostile world where the weather alone could kill them. Meanwhile, Laren and Dirck encounter a multitude of hazards and difficulties while Creena is desperately trying to get home again. Thus begins this family saga space adventure where, torn apart by space and time, each member faces hostile forces which threaten to separate them forever.

Reviews of A Dark of Endless Days by Marcha Fox

You have subscribed to alerts for Marcha Fox.