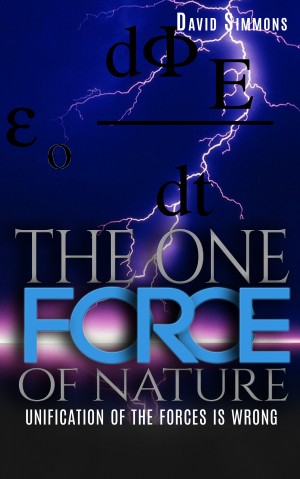 The One Force of Nature

The protons will have one excess positron and neutrons will have equal numbers of electrons and positrons. When they bond to form nuclei, they do so electromagnetically. So, the strong and weak nuclear forces are manifestations of the electromagnetic force which implies that gravity is a manifestation of the electromagnetic force i.e there's only one force of nature. So unification was the wrong method to come up with a Theory of Everything. In fact, I believe that electricity and magnetism shouldn't have been unified in the first place as they seem to act independently.

I will go on to explain a lot of the natural phenomena in terms of the electric and magnetic forces like radioactivity, Pauli's Exclusion Principle and how pigeons use the earth's magnetic field to navigate. I believe that much of the 20th Century was wasted so I'll be using 19th Century physics as well. My theory and explanations will be non-mathematical and doesn't require higher knowledge than high school physics.
Download: epub mobi (Kindle) pdf more Online Reader
lrf pdb txt
Price: Free! USD
Add to Library
Create Widget
Tags: gravity forces of nature electromagnetism astrophysics particle physics strong force weak force fundamental forces physics theory electromagnetic force
About David Simmons

I'm a retired IT professional with interest in Science. When I was at school, I always challenged the facts I was taught e.g. I disagreed with the inverse square law in that you can't get an infinity force. I proved that with two weak magnets by putting a south pole to another south pole and told my colleagues that, according to the inverse square law, it's impossible to make these poles touch. I then proceeded to make them touch thus disproving the law. From that time on, I never believed in infinities although I keep an open mind on the universe being infinite.

I also challenge the theories of relativity particularly the special theory because Einstein used length contraction and time dilation to compensate for the errors introduced by holding the speed of light constant. I also have an alternative of the Big Bang, which is what my first book - The One Force of Nature - is about, but after the energy was created. No one can explain the creation of the first energy without violating the conservation laws. So, Lawrence Krauss is wrong about his "universe from nothing". They merely classify that as philosophy so that they don't have to explain them.

Reviews of The One Force of Nature by David Simmons

You have subscribed to Smashwords Alerts new release notifications for David Simmons.

You have been added to David Simmons's favorite list.

You can also sign-up to receive email notifications whenever David Simmons releases a new book.