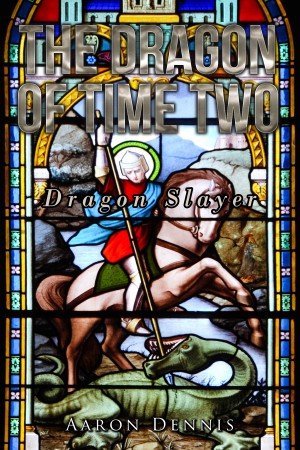 In one short word. WOW!

So, either stop reading right now, and go get Gods and Dragons, the first book in the Dragon of Time fantasy series, or be forever spoiled as I have to cover some events from Gods and Dragons to review the sequel, Dragon Slayer.

Scar, or Sarkany, the Dragon Slayer, has been created as an extension of Eternus the Dragon of Time, a real or true Dragon, and basically, the existence of all there is, so Scar is like the avatar of Eternus, and he has been tasked with purging the Dragons from Tiamhaal in this one particular reality.

Dragon Slayer begins with Scar taking his vengeance on Zoltek, king of the Zmajans, and after killing him, he takes his Dragon gem, goes into the realm of Zmaj, the Dragon of Destruction, and kills him to take his soul. Scar is the only being who can venture into the Dragons’ realms and take their souls, and he is more than glad to do this, because everything he ever wanted in a normal life has been taken from him in part by the Dragons, in part by the people who unknowingly worship Dragons, and in part by the real Gods.

After leaving the country of Usaj, Scar runs into an old friend, Shrikal, the paladin of perseverance, and together, they journey towards Alduheim, where Scar is supposed to meet up with N’Giwah and Labolas in order to figure out how to tackle the next Dragon.

See, the thing is, that killing the Dragons reduces the magic power that worshippers have. Like, when Scar killed Kulshedra, the people lost their markings of Kulshedra, and they lost the ability to make their armor stronger. The Zmajans lost their colors, and they lost the power to make their weapons into machines, so since the countries are at war, Scar can’t wantonly kill the Dragons because people will suffer until all the Dragons are killed, but things just aren’t so simple, and man is this a good “tail.”

Basically, it becomes important to figure out which kings and queens are willing to give up their Dragon gems without a fight. It’s also important to know which Dragon to kill and when because otherwise an evil ruler might still have their magic and kill good guys. On top of that, Scar, Labolas, and N’Giwah are trying to help the rulers forge alliances and convince them that they are worshipping Dragons. Some people still think they’re worshipping Gods.

If all the intrigue, action, espionage, and magic wasn’t enough, two things seems to be happening. One, Scar seems to be growing weaker, or perhaps becoming human…? I’m just mew-sing on that one. Two, he thinks he’s found a way to revive his lover from Gods and Dragons, Ylithia, the former paladin of severity by striking some deals with other rulers.

All I can say, and I say this honestly, is that Dennis is an unparalleled writer. The Dragon of Time series will stand the test of time.

Since this fantasy doesn’t have dwarves or elves, it has different people and different cultures, but they seem to mostly rooted in actual cultures.

Like, I don’t know what the Zmajans or Kulshedrans are supposed to be, but it seems the Fafnirians are Roman, the Dracos are Celtic, the Tiamatish are African, The Slibinish are Scandinavian, the Mireuans, and Nagish are some kind of Asian, maybe Japanese? There are many more, and Scultonians, which…I don’t know what they are, are my favorite.

awesome. Go read it. Now, I'm going to talk about Dragon Slayer, so if you don't want me to spoil Gods and Dragons stop

Scar, who now knows he is Sarkany, the Dragon Slayer, has just killed the dragon Kulshedra, so Artimis flies him back to

Usaj where he fights and kills Zoltek. Since Scar is on a quest for Eternus, the Dragon of Time, to gather the souls of

the dragons, he has to kill the kings of every country in orrder to take their dragon gems. Well, after he kills Zoltek,

he kills Zmaj, and of course the Zmajans lose their powers, but as it turns out, when the dragons die, and poeple lose

their powers, the other living dragons get stronger, and their worshipers do too, so now the paladins of Inhogupta the

Perseverants help Scar to try and bring the world to order, but there's all kind of chaos because Scar is a good guy and

he wants the kings and queens to hand over the gems without bloodshed, but some of them are bad, and they're conspiring

with each other.
There's so much more intrigue and espionage in this story than I ever expected, and it is a bit difficult to keep up with

the states of the nations, but in the end, it's like background information that really brings the world to life without

requiring you to memorize whatever is going on.
The short version is that Scar is on his mission to gather all the souls of each dragon, but since the dragons get

stronger as the others die, it's harder for him to kill them, but then he learns how to use their powers.
It's so freakin amazing. How is this story not on the tip of everyone's tongue?
I don't know. This guy is like the best writer ever and everyone's off reading Harry Potter.

I just hope the next Dragon of Time comes out soon. In the meantime, I'll be reading whatever else Dennis releases.