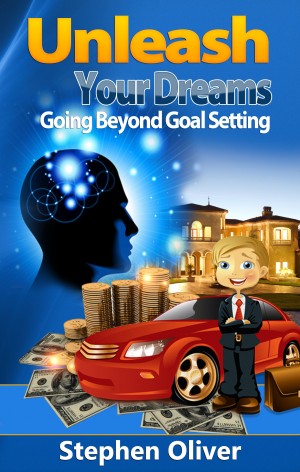 By Stephen Oliver
Creating goals is one thing, but achieving them is often much more difficult. Many people don't set them properly, so the results are haphazard. This book will teach you how to do it correctly, then lead you through the steps to make them come true. Using numerous NLP techniques, the methods are tried and true, based on the author's own experiences with them. More
Do you have problems setting goals?

Once you’ve set your goals, do you look around and say to yourself “now what?” Do you find it difficult to know whether you’re achieving your goals?

If any of these seems familiar, then this is the book for you. You'll learn how to:
Decide what goals you want to make reality, and pass them through the steps necessary to make them compelling enough for you to follow.

Proceed from writing your goals down to actually doing something about them.

Deal with blocks and lack of motivation, align yourself around your goals to move all parts of yourself in the same direction, and even learn a way to create new options and ideas.

Create new beliefs to support you in achieving your goals.

In this book, Stephen shows you how to do it, and illustrates this by showing how he did it.

Included are 20 worksheets as well as 4 cutouts to help you with the exercises in the book. These can also be downloaded and printed out for your personal use.

Stephen has been interested in personal growth and the bringing out of the best of people’s potential for well over 40 years. Even as a computer programmer and systems analyst since the beginning of the 80’s, his aim has always been to improve the quality of life for himself and others. This interest led him to learn about psychology and growth techniques, resulting in his becoming an NLP Practitioner (Neuro-Linguistic Programming) in 1993.

At the beginning of 1994 he came into contact with Reiki, attending a First Degree Reiki seminar run by a Reiki Master of The Reiki Network® with his parents. Seeing the improvements that Reiki was bringing to the whole family, they quickly went on to the Second Degree. It became apparent to him that Reiki was one of the best tools for the non-invasive support of personal growth that he’d encountered, so he applied for training as a Reiki Master within the Network. He finished his year’s training mid-1996, and now gives treatments and teaches Reiki in English and German, in England, Switzerland and Spain.

In 2004, he began a training course as an adult educator, which he completed in the following year. As part of his training, he created the written training concept that The Reiki Network® now uses.

In 2013, he published his first self-help book and is now a full-time writer. He is presently working on a follow-up self-help book, a fantasy novel, and a series of short story collections.

You have subscribed to alerts for Stephen Oliver.

You have been added to Stephen Oliver's favorite list.

You can also sign-up to receive email notifications whenever Stephen Oliver releases a new book.