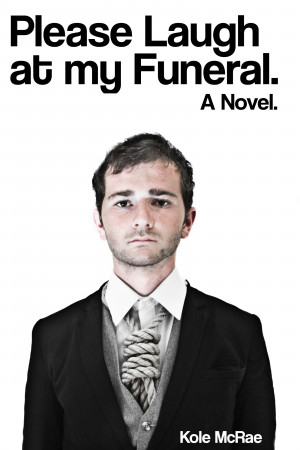 Please Laugh at my Funeral

Rated 4.00/5 based on 2 reviews
Steve attempted suicide last night and failed. With nothing left to lose he gives himself 30 days to finally do anything he wants without repercussions. This takes him on an adventure in crime, fear and penguins.
Download: epub mobi (Kindle) pdf more Online Reader
lrf pdb txt
Price: Free! USD
Add to Library
Create Widget
Tags: life depression suicide death humour meaning of life
About Kole McRae

Kole is a writer based in Toronto, Ontario. He has written professionally for magazines, newspapers, television and radio.

Reviews of Please Laugh at my Funeral by Kole McRae

This is the story of Steve, a guy who loses his job and decides to kill himself. But instead of doing it right away, he makes a promise to do it after precisely one month, during which time he intends to live as fully as possible. This involves drug-taking and hanging around with homeless people. He also pulls a bunch of extreme urban stunts such as riding on the roof of a passenger train. Finally, (spoiler alert) after 30 days he does indeed commit suicide by way of a jump from a high building.

This started off promising but after a few chapters it began to drag. There aren’t many twists and turns and the story plods forward in what is essentially a sequence of self-contained episodes.

I also found Steve not terribly convincing. Someone wanting to die would logically be very depressed, and a depressed person doesn’t go around having fun every day. His suicide plan seems arbitrary and paradoxical. Where did this concept come from? He has a lot of new experiences but his character simply doesn’t develop.

There’s also a not very credible overdose scene in which the victim dies rather a long time after apparently injecting heroin.

Parts of this feel like a first draft. It was ok...

Fun read. Could not put it down. Highly recommend this story.

You have subscribed to alerts for Kole McRae.

You have been added to Kole McRae's favorite list.

You can also sign-up to receive email notifications whenever Kole McRae releases a new book.