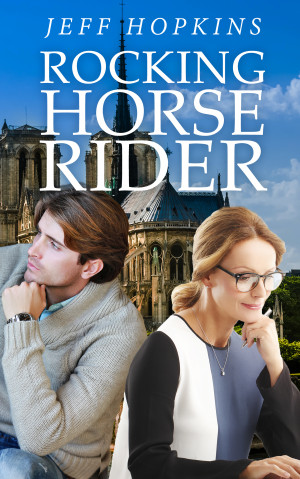 By Jeff Hopkins
The result when two lives collide unexpectedly cannot be predicted. It might prove a catastrophe, or possibly a catalyst.

Played out against a background of three of the world’s most iconic cities: London, Paris and Sydney, Rocking Horse Rider is galaxy of glittering personalities searching for identity and acceptance. More
The result when two lives collide unexpectedly cannot be predicted. It might prove a catastrophe, or possibly a catalyst.

Twenty-two year old architectural intern, Rawden Phillips, has had all the benefits that nature and nurture could bestow, but he is lost. Australian heiress, Olivia Summer-Hayes, who should be running a Corporate Empire, is running away and has started making rash decisions. Suzanne Read has been commissioned to help find them both.

Half a world away Richard Barrington, a man with a fascinating personal history, is trying to juggle long-standing loyalties with the control of a conglomerate of companies.

Played out against a background of three of the world’s most iconic cities: London, Paris and Sydney, Rocking Horse Rider is galaxy of glittering personalities searching for identity and acceptance.

About the Author
Jeff Hopkins (1950) is a retired schoolteacher. He lives in Western Australia. As the drama master at a private boys’ school he wrote eleven original musical plays and produced and directed them at the school.
In 1992, he researched and wrote a family history, 'Life’s Race Well Run', and after retiring in 2006 he has written thirteen novels and a Memoir:
• Artifice (2015)
• Gnarl (2015)
• The Spiv: The Robbie Sparrow Story (2015)
• Impressment: Managers, Actors and Impressed Boys (2015)
• Benedict Lovelace and the Travelling Show (2016)
• Reflections; A Story of Friendship (2016)
• Rocking Horse Rider (2016)
• The Hydrographer: The Clyde Steadman Story (2017)
• Lord Gnarl (2017): A Sequel to Gnarl
• Handsome Jack: A Whizz-kid’s Story (2019).
• The Gavin Johns Story: A Belle Beamish Investigation (2019)
• Caliphs and Kings (2020):Concluding the Gnarl Trilogy
• A Horse Called Signs: A Sequel to Handsome Jack
• Creatively:A Memoir of Plays, Films, Musicals and Books