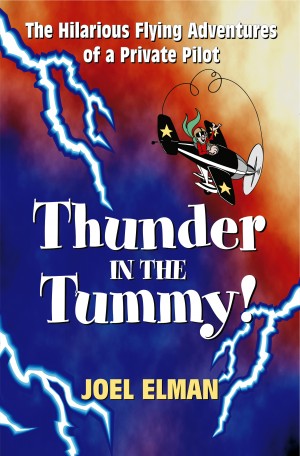 Thunder in the Tummy! The Hilarious Flying Adventures of a Private Pilot

What people are saying about THUNDER IN THE TUMMY!

THUNDER IN THE TUMMY! — The winner of the Squarfius Maximus Award for marvelous writing. “The book is hilarious, varied, insightful, entertaining and wholesome. It is also educational, but with a vengeance. A remarkable achievement.”
—Lorenzo Q. Squarf, Flamekeeper of Western Civilization

THUNDER IN THE TUMMY! — Better in the tummy than in the upholstery! It is great fun to read! Flying adventure with a riotous, literate, and self-effacing twist.”
—Mordecai Swiffle, the oldest living student pilot in the world

THUNDER IN THE TUMMY! — All women whose significant others are pilots should have lollypops in their purses at all times. Read this book and you will know why.”
—Squishalie Doodlebug Provolone, Significant Other

“I roared twice as much as the other guys!” —Multi-Engine McGoo

Joel Elman, a resident of Atlanta, Georgia, was born and raised in Boston, Massachusetts. He earned a Liberal Arts degree from Boston University; from there he attended Brown University Graduate School, believing that a Ph.D. in Russian would enable him to escape the gravitational pull of ignorance and poverty. He left Brown after completing his first year of advanced study, having made the stunning discovery that ignorance and poverty are not inextricably linked. Mr. Elman also concluded that the study of Old Church Slavonic, and the need to sound like one is gargling oysters in order to pronounce it correctly, was not relevant to modern life or his desire to pass himself off as an English gentleman.

Mr. Elman then earned an MBA degree from Harvard Business School, and, like every other graduate in the history of that splendid institution, was informed by an anonymous official that he was in the top third of his class. His unfinished poem entitled “God Bless Harvard” has been under construction for the past 36 years.

His post-graduate role in American industry as a dynamic executive is legendary, but irrelevant to his heroic flying adventures, and has been omitted to make space for his photo.

A licensed pilot for over four decades, Mr. Elman owns and pilots his own airplane. Many of the short stories in this book previously appeared in major flying magazines, a number of which are listed on the back cover.

If you have this book in your hands and are wondering whether you should buy it, let us urge you to splurge. If you don’t like the book, you can probably get your money back from the author who is sensitive about such things, thus creating a standard in the publishing world that not even the Bible has attained.

Reviews of Thunder in the Tummy! The Hilarious Flying Adventures of a Private Pilot by Joel Elman

One of the funniest books I've ever read--I'm talking real belly laughter! And you don't have to be a pilot to appreciate the humor--these stories are really about how funny life is sometimes, and how to find humor even in the most desperate circumstances. A wonderful book to read when your spirits need a lift, or you need to remember to take life a little less seriously, or you just plain want to feel good. In other words, a wonderful book anytime, anywhere!

(reviewed 10 days after purchase)
Jen Cowie reviewed on July 4, 2011
(no rating)
WOW! What an awesome book! The stories are told with a raucous sense of humour which will have anyone, in or out of the flying world, doubling over with laughter.

The mischeivious exploits of a passionate pilot with a sense of humour and the innate inability to take life seriously is a fabulous combination!

Mixing outrageous pranks with some wisdom about flying and more importantly life, I found this book to be worth every penny!

HIGHLY RECOMMENDED!
5 Stars if you're looking for a laugh!

You have subscribed to alerts for Joel Elman.

You have been added to Joel Elman's favorite list.

You can also sign-up to receive email notifications whenever Joel Elman releases a new book.