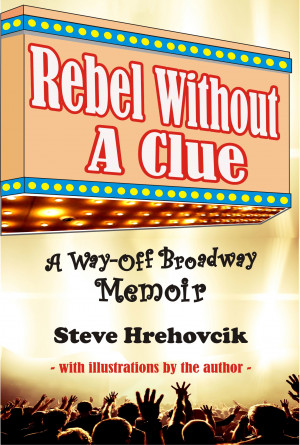 Rebel Without A Clue - A Way-Off Broadway Memoir

By Steve Hrehovcik
Blending a confessional with a sense of humor, Rebel Without A Clue – A Way-Off Broadway Memoir illustrates how my persistence, patience and pluck made me an expert on survival. I describe my turbulent, often farcical, journey in a desperate search for a theatrical career. While my name never appeared on a Broadway marquee, I also reveal how I achieved several surprising triumphs – most important, More
Blending a candid confessional with a sense of humor, Rebel Without A Clue – A Way-Off Broadway Memoir illustrates how, with persistence, patience and pluck, I became an expert on survival. My memoir describes my turbulent, often farcical, journey in a desperate search for a career in the theater. After suffering countless heartbreaking disappointments, I discovered the bright lights of Broadway became littered with burned-out bulbs and the drama, on stage and off, made a not-so-funny second act. Never giving up, my story also reveals how I managed to carry on and achieve a few surprising triumphs along the way – most important, a marriage of 51 years, three remarkable children and a wonderful grandson.
In 27 crisp chapters, a spirited road map unfolds of the zigzag route I wandered, confident my big theatrical break loomed over the next speed bump or just around a hidden corner.
Although I was clueless of my rebellion at the time, looking back, I realize my contrariness started at a young age. I knew my parents loved and cared for me, but somewhere I lost confidence in them and we drifted apart. My father was a hard-working, stern man who I never connected with. My mother was a gentle woman who served as the peacemaker of the household. My parents and older sister and brother were born in what was then Czechoslovakia, near the Russian border. My father hoped to move the family to the United States, but because of quotas he diverted us to Canada where I was born in 1938.
The acting bug hit me early, so I became a theater major at Rutgers University, the University of Miami and in the graduate program at Catholic University. I even earned the “Best Actor Award” while at Miami, so my ego got an unrealistic boost to forge ahead. Could my name on a Broadway marquee be far away?
In a laughable way, major decisions about my future happened in a haphazard clueless manner. If not for the urging of a friend I would never have attended college. Another time, an accidental visit with a Reserve Officers’ Training Corps (ROTC) recruiter at Miami led to a commission as a 2nd Lieutenant in the U.S. Army.
To my surprise, this uncharted course also revealed some improbable discoveries. When acting roles didn’t materialize and desperate for a paying job, I learned I had an innate flair as a copywriter. This writing skill would serve me well in future jobs, in particular, as a freelance writer. Not every experience had an upside. My lack of awareness put me in serious jeopardy when I almost landed in jail for not having a Green Card since I was a Canadian citizen.
On paper, my theater resume looked impressive: actor, writer, director, producer, stage manager, set and costume designer, lighting technician, publicity and marketing manager, as well as gofer – “go for coffee and other sundries.” Yet all these theater experiences never amounted to less than a footnote in show business playbill.
There’s a theater expression “Once an actor, always a waiter.” While I never held a waiter’s job, to support my family I stumbled onto a number of careers. Often the ad-libbing skills I learned as a performer helped me “audition” for a job. I worked as a copywriter, product and packaging designer, advertising executive, sales professional, business owner, freelance writer and artist, even a night shift gas station attendant while looking for more lucrative employment. While many of these jobs had a decent pay and promising career path, when tempted by a theater job, I’d quit and chase another illusive rainbow.
I held these jobs in New Jersey, Florida, New York, Illinois, Massachusetts, Maine - and if I include my “employment” with the U.S. Army - Georgia, Maryland and South Korea.
For those who struggle to forge ahead against overwhelming obstacles, Rebel Without A Clue may provide the jump-start to find the courage to press on. Or, it could just be entertaining to read. For fun, I also include cartoons after each chapter.

In addition to his adventures in the theater, Steve Hrehovcik has had eclectic careers as a copywriter, product and packaging designer, advertising executive, sales professional, business owner, writer and artist. He’s written more than 700 feature articles for newspapers, magazines and business publications, co-authored an independent film and worked as a ghost writer of a mystery/thriller.
He also prepared advertising copy for all media – print, radio, TV, brochures and publicity pieces. He edited a memoir and business newsletters, written and produced a musical revue, a television series presented on several stations and staged a live historical reenactment.
He has several works in progress, including a Broadway musical comedy, two movie scripts, a series of short stories and a children’s book.
In addition, he is a freelance artist. His work includes paintings of homes, portraits, pets and caricature drawings. Recent works are illustrations for two musical children’s eBooks, Murfy Finds a Home and Murfy’s River Adventure.

Praise for Rebel Without A Clue
“The sincerity and humility with which he writes are the magic in this memoir as he searches for that ‘Clue’ and the ultimate solution.”
David Morse, Author of Harry & Maude Take It On and Julie’s Climb

“Steve’s memoir is an engaging, genuine, and insightful read. Each time he saw a dream fail, he got up and dreamed again. As one who loved the theater, perhaps Steve’s greatest role in life was to not stand still, but to grow, evolve and ultimately give back.”
Jean M. Flahive, Author of Billy Boy and Railroad to the Moon

"Rebel Without a Clue is an autobiographical mosaic that provides great chucks of wisdom mixed with healthy doses of wit and humility. There is a lot to relate to here, especially for those of us who could have made better decisions along the way, but came through it smiling in spite of ourselves.”
Thomas Handel, Executive Director, Channel 5, Community Television Network, Portland, Maine, Theater Director and Actor

“Everybody has a story. Steve Hrehovcik’s story, recounted with humor and humility in his memoir Rebel Without A Clue, is a heroic journey through an ordinary life. An Army veteran, aspiring actor, husband and father, Hrehovcik tells an inspirational story about taking advantage of opportunities, overcoming challenges and always finding the silver lining.
Bob Keyes, Arts Writer, Portland Press Herald/Maine Sunday Telegram

"Steve Hrehovcik has written a personal memoir that is at once candid, charming, insightful, and inspirational. It is a wild and glorious romp through a life well-spent, if at times sadly-lived, one that demonstrates in spades the value of love, persistence, and resilience in the face of hardship, challenge, and change."
Richard Barringer, Emeritus Professor, Muskie School of Public Service, University of Southern Maine

“Ever vulnerable and sensitive, Steve Hrehovcik bravely shares his stories by focusing inward to unfolding awareness. With brilliant metaphor, he holds us captive to identify and find meaning in our own clues in life which is a gift. A moving memoir that is an act of discovery in its perseverance.”
J. Nelson Garman, Founder of The Power Triangle

“Rebel Without A Clue is a down-to-earth nostalgic story about a man and his dreams. It will surely bring a smile to your face.”
Leo J. Maloney, Author of the Dan Morgan Thriller Series by Kensington Publishing

“Steve Hrehovcik’s Rebel Without A Clue gives the reader a glimpse at what is his long and winding road of self-discovery and self-worth. Behind all the trials, disappointments and missed opportunities he encounters along the way is a man who still can smile and be thankful for his wife of 51 years, three great kids and a grandchild. Really isn’t that what life is all about? Family, memories and the continuing drive to be a better person. Well done Steve.”
Robert Baldacci, Principal, Baldacci Group

You have subscribed to alerts for Steve Hrehovcik.

You have been added to Steve Hrehovcik's favorite list.

You can also sign-up to receive email notifications whenever Steve Hrehovcik releases a new book.