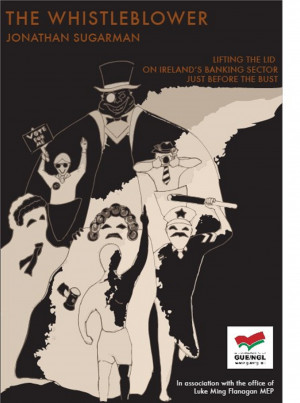 By Jonathan Sugarman
IT WAS ME, I DID IT!
In 2007 Jonathan Sugarman walked into the Irish Regulator’s office, told him: ‘I’ve been breaking your most serious banking law; signing off on billions that don’t exist, on statements verifying my employer bank is sound when in fact it dices with disaster, breaks liquidity requirements by multiples; here, the evidence.’
For this, he has paid a high price. This is his story. More
It was me, I did it!
Imagine walking into a police station with a bloodied knife, telling the Inspector you had just murdered someone and offering to bring them to the site of the crime – what reaction would expect?
Now alter the above to reflect the equivalent of murder in the financial sector, a capital punishment crime if you'll pardon the poor pun.
Just over nine years ago, 2007, a full year before the disastrous blanket bank guarantee, Jonathan Sugarman walked into the Irish Regulator’s office and told him – ‘I’ve been breaking your law, probably the most serious law in banking; I’ve been signing off every day for billions that don’t exist, I’ve been signing off on statements verifying that the bank for which I work – Unicredit (Irl) – is sound when in fact it is dicing with disaster, breaking the liquidity requirements by many multiples, and here is the evidence.’
Jonathan walked back out that door expecting that all hell was about to break loose, that he and the bank would be called before the Regulator with God knows what about to be visited on him.
Nothing happened; it was as though he had never said a word.
BANKING – WHERE THE LAW IS MADE TO BE BROKEN
Jonathan’s problem was that he took his duties as Risk Manager seriously; his further problem was that he took the law even more seriously, the law governing liquidity requirements for banks in particular, put in place to protect depositors, shareholders and bondholders alike. When he found the breach in compliance he acted, first by going to his seniors in the bank, then to the Regulator.
Eventually, frustrated by the response and fearing that he personally would be held to account if and when the truth of what was happening emerged, he resigned.
Since then Jonathan Sugarman has battled to tell his story, battled to have those whose tolerance and/or blithe ignoring of what was happening around them led to the collapse of the banking sector in Ireland and across the globe, held to account.
SCARED AND SCARRED
He has suffered in that battle, suffered grievously, bears deep emotional and mental scars. It’s not easy being a whistleblower. It’s a lonely place, a scary place, a debilitating place, and the bigger your story, the less that people are inclined to believe you, the more isolated you become.
Jonathan’s is a big story. It takes us behind the scenes in the Irish Financial Services Centre (IFSC) in the years before the bust, into the inner sanctum of one of the biggest banks in Europe, and it reveals to us what was going, gives us an idea of just why every Irish bank, and many others that were domiciled in the IFSC, went down so fast and so spectacularly.
Available ebook formats: epub mobi pdf lrf pdb txt html
First 15% Sample: epub mobi (Kindle) lrf more Online Reader
pdb
Price: $3.99 USD
Buy Add to Library Give as a Gift
How gifting works
Create Widget
Tags: whistleblower ifsc deutsche bank draghi sugarman anglo irish bank depfa luke ming flanagan promissory notes unicredit

You have subscribed to alerts for Jonathan Sugarman.

You have been added to Jonathan Sugarman's favorite list.

You can also sign-up to receive email notifications whenever Jonathan Sugarman releases a new book.