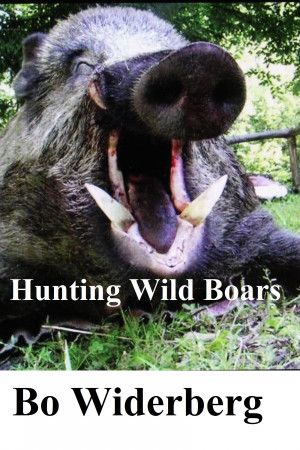 By Bo Widerberg
Walter Casey, and his brother Laurence went hunting wild boars with Jack Lind. As they arrived, the three of them had to climb up a rope ladder. From up there they shot the first boar, As Jack climbed down to add more meat, he fell, and accidentally shot himself. Another boar came and smelled Jack, Walter shot it. As police arrived they to save the police from another boar. Four boars, a record. More
When Walter Casey got a phone-call that his elderly brother Laurence, was coming over, for some boar hunting. He was surprised and happy. How did you manage to get this permit for a Boar hunt, Walter asked. Well Ester, Laurence wife, got some extra from her work, and she has to follow some of her bosses abroad. So, she asked why I didn't drive over to you for some Boar hunting, as both of you loves to kill the poor animals. So, here I am with permission to go hunting. Are you ready? Sure Laurence, one of my men, Jack Lind likes to hunt, can he come with us? Sure, if he has a rifle, and can shoot. He uses a shotgun, he doesn't like rifles. I'll phone him up and ask him. Jack Lind loved the idea, and asked if his eight cartridges would be enough. Plenty for this trip, answered Walter. When they arrived to the shooting area, Walter got his paper stamped, and the three started to walk to where Walter had his tree platform. To get up to the platform, you had to climb up a rope ladder. Laurence had put out the bloody meat for the Boars, and as they relaxed look at all the small animal smelling the meat, Laurence said we have to put out some more of the meat. Jack asked if he could do it, and started to climb down the rope ladder. When he was done, Walter called down that something was looking at Jack from some bushes. Jack to hurry up the ladder fell, and a shot went of. He had shot himself, and was dead. Laurence killed the Boar, and the two went down the rope ladder. Walter called 9-1-1 and reported the accident, as the police arrived, Laurence and Walter had shot another Boar. To save the police, and the ambulance people the two shot another two boars. As the police did their investigation, another two Boars came out of the bushes. Seeing all the people, they turned around and went back into the bushes,
Available ebook formats: epub mobi pdf lrf pdb txt html
First 20% Sample: epub mobi (Kindle) lrf more Online Reader
pdb
Price: $0.99 USD
Buy Add to Library Give as a Gift
How gifting works
Create Widget
Tags: hunting rifle death killing shooting shotgun accident wild boars
About Bo Widerberg

My name is Bo Widerberg/artbcool, I am born in Europe too many years ago. Have lived with my family in Florida since 1985 and we are happy with our situation. Would feel a lot better if more people would read my stories.

You have subscribed to Smashwords Alerts new release notifications for Bo Widerberg.

You have been added to Bo Widerberg's favorite list.

You can also sign-up to receive email notifications whenever Bo Widerberg releases a new book.