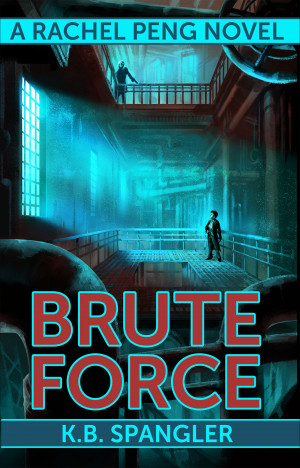 Rated 5.00/5 based on 1 review
As the first cyborg liaison to the Washington D.C. Metropolitan Police, Agent Rachel Peng knows how kidnappings can tear families apart. This time, her own family is at risk - her niece is in the hands of a militia with an agenda. Rachel will stop at nothing to get Avery back, even if this means teaming up with a dangerous man from her past. More
Two years ago, OACET Agent Rachel Peng helped a serial murderer escape from police custody. This morning, he appeared in her backyard, wearing the face of a dead friend from her days in the Army. Within minutes of his arrival, Rachel learns that the head of OACET’s wife has been kidnapped . . . along with Rachel’s niece.

Rachel can’t deny that Marshall Wyatt has helped her and the other members of the Office of Adaptive and Complementary Technologies before, but that was on his terms. This time, he says he’s here to do what she can’t—and as OACET’s liaison to the Washington D.C. Metropolitan Police Department, the list of what Rachel can’t be caught doing is long. If she wants to rescue her niece, she might have to let Wyatt do what he does best.

“after spending the length of the novel with her, I'm eager to pick up the next one to see what's next for Rachel Peng” (io9)

K.B. Spangler lives in North Carolina with her husband, Brown, and as many Rottweilers as she can sneak in the house without his noticing.

About the Series: Rachel Peng

Rachel Peng is a former U.S. Army Warrant Officer, now working as the first cyborg liaison to the Washington D.C. Metropolitan Police Department. Agent Peng and her team have a reputation for handling the hard crimes. For them, murder is usually only the beginning.

In Brute Force, Peng takes on the surprisingly current problem of Domestic Extremists. Surprisingly current even to the author: her initial draft got scooped by the real-life Malheur Wildlife Refuge occupation. Truth is stranger than fiction indeed.

However, The breadth of Spanglers palette is amazing, so she just doubled down on the conspiracies and made it work.
No other author I know of can switch gears so thoroughly between the psychology of abuse, suitable poetry citations, moral twilight zones, unravelling intrigue at the stratospheric levels of government and tie it together with a flowering begonia at the end.

Spangler embraces the concept that character flaws make a good story. When you have applied USA-Black-Budget levels of torture to your characters, you get a VERY flawed character, and a VERY good story.
Each character in Spanglers universe (both books and comic) has their unique defining flaws. It's not obvious at first, but seeing the interplay unfold is magic.

Peng has been through some heavy shit, and it shows. She has psychological scars and scratches at them until they bleed. She then combines mental crutches (cool, dependable concrete!) with a deftly applied dose of denial as she searches her way back to normalcy. It is thrilling to read how she deals with herself. The psychological angle alone would make for a decent novel, but of course she has a job to do, and a spectacular job it is.
Her routine involves staring down hostile senators, convincing suicidal narcissists to please not explode themselves and the hostages, and explaining to her girlfriend that the confirmed murderous psychopath is safe enough to handle, just like the ADHD-addled bundle of violence, but she should avoid Rich-Kid-with-the-Trust-Fund and the officer from Homeland Security. I may sound like a raving madman now, but that's just Rachel's life. I swear it all makes sense, as I said, Spangler knows how to switch gears believably.

It is a delight to follow Peng as she navigates a maze of clues, subtle Chekov's Guns and the web of Politics that mires it all.
My favourite parts are always when the puzzle pieces start tumbling together. Spangler is very adept at the detective reveal: A half page of choice callbacks to the preceding 18 chapters and suddenly the plot snaps together in your mind just as vividly as in Agent Rachel Peng's.
Of course, there's always that nagging doubt that you're missing something critical, and you are. Spangler always saves a last piece for the metaplot, revealing at the very end how the villain-du-jour ties into the bigger universe's storyline. Plans within Plans, Stories within Stories!

Seriously, read Brute Force if any of the following apply:
- You're a fan of Detective novels, or conspiracies
- Civil Rights interest you academically
- You love solid character building (even the villains!)
- Cast diversity is your thing (lesbian, gay, hetero, asian, latin, white, african, upper-class, lower-class, crazy, sane; it's all there, and in that delightfully background way that make it true diversity, not a marketing bulletpoint)
- you read "A Girl and Her Fed" (Spangler's webcomic/graphic novel)
- you love thoroughly-researched social commentary
- You want to support the restoration of former Poet Laureate Randall Jarrell's home (Where Spangler now lives)

You have subscribed to alerts for K.B. Spangler.

You have been added to K.B. Spangler's favorite list.

You can also sign-up to receive email notifications whenever K.B. Spangler releases a new book.