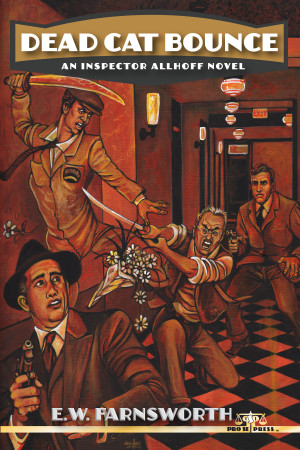 Allhoff was a detective like no other. Mangled and left without legs after leading a failed police raid, Allhoff found himself an unofficial consultant to the New York Police Department. Kept in a rundown tenement across from headquarters, Allhoff is assisted by two men, both of which he tortures with his aggressive nature and abrasive words. One, the rookie responsible for bungling the raid which left the great detective an invalid and the other, a career cop going through hell just to get to his retirement. Three men who stew in a cesspool of hate, self doubt, and anger, and yet, led by Allhoff, they solve the strangest cases the NYPD has ever faced! In DEAD CAT BOUNCE, wealthy collectors of weapons are dying in locked rooms and the NYPD cannot stop the rash of murders. That means that Inspector Allhoff and his assistants are on the case. But can they stop the phantomlike killer before more noted citizens die or is this the case that will put an end to their careers? And will Allhoff’s men rise to meet the challenge of the mystery while being beaten by his acerbic attitude and caustic attacks or will they simply leave the broken man to twist in the proverbial wind?

Dr. Wilson F. Engel, III, writing under his own name and the pseudonym E. W. Farnsworth, is widely published on line and in print. With over 250 poems in print and online, Dr. Engel is the author of seven books of poetry (four illustrated by artist Charlene S. Engel), two novels, a critical edition, numerous stories, a film script, a play, and over 250 literary essays, articles, notes and reviews. Winner of five first-place prizes in open, international competitions for his short stories in 2014 and 2015, Dr. Engel's westerns, spy stories, romance/thrillers and a romance will be separately published under contract in 2015. His picaresque novel about global intrigue in cryptocurrency enforcement will appear in 2016. Dr. Engel has had 23 short stories contracted for publication in anthologies that will appear in 2015. Some of E. W. Farnsworth's sci-fi stories and modern fables are available on line from Ether Books in the UK and fictuary.com in the US, and two of his John Fulghum mysteries will be coming on line in 2015 at IndelibleCHAOS in India.

You have subscribed to alerts for E.W. Farnsworth.

You have been added to E.W. Farnsworth's favorite list.

You can also sign-up to receive email notifications whenever E.W. Farnsworth releases a new book.