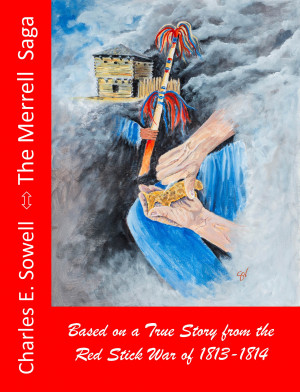 By Charles E. Sowell
Rated 4.00/5 based on 1 reviews
The Merrell Saga is based upon a true but complicated story about the Merrell family, pioneers in the dangerous Mississippi Territory of the early 1800's. The stories of the family's hardships, tragedies, perseverance, and their ultimate triumphs of the human spirit are uniquely extraordinary in the chronicles of American pioneer history. More
In July of 1813, America’s war against the British Empire had been in progress for just over a year. On the American frontier of the Mississippi Territory, thousands of American settlers feared for their lives as the nearby Red Stick faction of the Muscogee Creeks threatened to align with Great Britain. The Merrell Saga is based upon the true but complicated story of the Merrell family during and after this tumultuous period.
When the Mississippi Territorial government sends out calls for volunteers to join the militia to defend the country from attack, Jack Merrell, a young husband and father, is torn between duty to his family and duty to his country. The decision that he makes will forever change the trajectory of his life and the lives of his family members. Jack and his wife, Sarah, separated by bizarre and unique circumstances, each experience hardships and tragedies which propel their lives into different directions. The stories of their individual struggles of survival, perseverance, and redemption lead to a heart-rending reunion that is extraordinarily unique in the chronicles of American pioneer history.

Charles Sowell holds a B.A. degree in Mathematics from the University of Texas at Arlington and a Master of Business Administration degree from Texas Christian University. He spent thirty-nine years in the aerospace industry, where he retired in 2006 as Finance Director of Bell Helicopter’s Customer Support and Services Division. During the last six years of his career at Bell, he was also an adjunct professor with the Graduate School of Management at the University of Dallas.

In retirement, Charles has pursued a hobby of genealogy research, which led to his first book, MY AMERICAN HERITAGE. The discovery of a story that had been passed down through one of his family lines became the genesis of THE MERRELL SAGA.

At the time of the time of the War of 1812, wild Indians may have “raised commercial crops, owned slaves, and bred racing horses” but that did not make them less wild. Jack Merrell lived with his young wife and infant son on the fringe of the Creek Nation. Zealot, Josiah Francis, AKA The Profit, and William Weatherford, AKA Red Eagle, threatened war against the white settlers encroaching on their land. The threat posed by the warlike Creeks, known as Red Sticks, moved Jack to sign on for a six-month stint with the militia. While he languished idly in one of many hastily erected forts, the Red Sticks attacked his and the surrounding farms while most men were preoccupied with tending their fields. Women and children were clubbed and scalped by the murderous savages and left for dead. News of the massacre reached Jack by the slow and unreliable mail system of the time. He, naturally, lapsed into a deep depression, however, neither his wife, Sarah, nor his son, William, died. Both were slowly and painfully nursed back to health. Jack, on the other hand, threw himself into the quest for revenge with careless abandon. He sustained nearly mortal wounds in a desperate attempt to drive the Red Sticks out of Alabama, but he also did not succumb to his injuries. Just as in the case of her own near brush with death, Sarah only received word that he had died. Neither received what should have been the happy correction. What transpired over in the next few years was as tragic as the near mortal wounds themselves.

The Merrell Saga is the novelized account of family history. Mr. Sowell did years of genealogical research before composing his excellent account of the disastrous chain of events that befell his ancestors. As a lover of historical fiction and family history, this book struck a sympathetic chord in me. If this story had not been true, one would be tempted to think that the unthinkably cruel coincidences that befell the characters were the result of the twisted imaginings of a deeply troubled author. The prose may lack a little sophistication, but it does not detract from an excellent, and moving, tale.

You have subscribed to alerts for Charles E. Sowell.

You have been added to Charles E. Sowell's favorite list.

You can also sign-up to receive email notifications whenever Charles E. Sowell releases a new book.