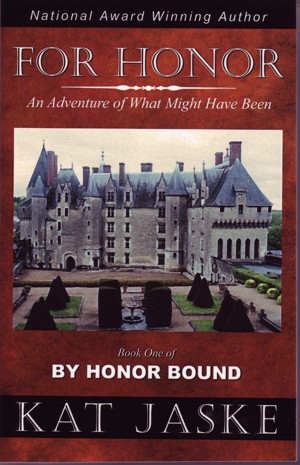 For Honor: An Adventure of What Might Have Been

By Kat Jaske
Rated 5.00/5 based on 5 reviews
Escape to the intrigue and adventure of 1638 France where the musketeers uncover an insidious plot to overthrow King Louis XIII and divide the country. Fight with the musketeers; ride with them and find the spies. Try to stay alive, and just accept that Lady Laurel's fencing skills are needed. She's good, surprisingly good—-and beautiful. Enter a battle where honor is more valued than life. More
Excerpt 1.

Porthos took a step back and placed his hand on the hilt of his cutlass. “That cocky young pup,” he replied. “Do I sense an insult to my powers of attraction? I just may have to call you out.”

“Very well,” Aramis agreed. “Just please be so kind as to leave my face unblemished. I would like the ladies to remember me as I am now.”

The large man nodded his head ever so slightly, and the two opponents drew their swords, saluted, then engaged.

“Sacrebleu,” D’Artagnan cursed under his breath; that had to be broken up immediately before it became bloody.

Excerpt 2:
The spy looked Laurel up and down. Dressed in a court gown and her hair done up, she was far from presenting a threatening picture, and the sword in her hand looked distinctly out of place. Not to mention that her shoulder was wounded. “You don’t really think you can stop me, mademoiselle,” he informed her in his most condescending tones and moved to pass her.

She raised her weapon, barring his way. “You don’t seriously think that I’m going to let you walk away after the crimes you’ve committed against me and mine.” They stood staring at each other.

Neither gave and Laurel moved to disarm the man. Automatically, Georges parried. Swiftly, trying not to stumble, she retreated at his attack, cursing the skirts that hampered her movements and gave the half-starved and tired man a significant advantage.

She whirled backward, narrowly avoiding his stroke. Disengage, and she backed up several steps, allowing herself just enough time to slit her skirts to reveal the pantalets underneath. The skirts fell at her feet and she jumped away from another lunge. Better, though by no means as good as breeches, a good tunic, and sturdy pair of boots. Men didn’t realize how lucky they had it. Of course they got the better end of the deal in everything.

Her arm wavered as his sword thrust upward, and she linked her blade with his to block the blow. The blow sent little shock waves tingling up her arm. Her right arm simply wasn’t as strong as her left, and she was out of practice in fighting right-handed.

If she ever got out of this and was able to heal, she swore to herself that she’d not neglect her fencing skills for either hand. The balls of her feet ached as she felt every stone and pebble through the thin slippers. Blast fashion for its absurdities! Blast men for dictating not only their own fashion but the fashions of women as well. She lunged, swiping upward, and her stroke was easily knocked aside, almost dislodging her sword in the process.

Her grip failing, she still managed to block the next blow and dance around behind him. Okay, enough was enough. She threw her sword in the air and caught it in her left hand, and Georges looked at her like she was a complete fool. His sword at ready, he circled her. “You really think you still have a chance. Mademoiselle, it seems you are doubly foolish now.”

“Then a fool I will be,” she huffed, attacking him and driving him back, to his surprise.

Reviews of For Honor: An Adventure of What Might Have Been by Kat Jaske

Imagine fan fiction for the Three Musketeers adding a young woman swordsperson into the mix and you have "For Honor". Exciting with action and familiar characters.
It ends with the possibilities of further adventures. There is at least one straight forward sequel.

Thomas is perhaps one of the most skilled spies France has ever had. The scene opens with Thomas and his teen son fleeing across cold wasteland from Prussia to France with documents that will reveal an insidious plot to overthrow King Louis XIII. They find temporary refuge from the bitter winter, where it is decided that Erik will help young Christophe get back to France, safely, they hope. ——Excerpt: In Thomas’ hand was a collection of papers. “Take them,” Thomas told his son. “Anything at all that is found on me will condemn me, and I have every intention of coming back to you alive and well. Watch my estate until I return.” Langeac, Christophe knew his father meant, as it always had been the most precious of his father’s holdings, at least to Thomas, regardless of its humble size compared to his other numerous holdings.——
They are both being pursued by their enemy and death would follow their capture.

As the adventure progresses, we find the musketeers embarking on a mundane mission for the king about the same time as Thomas’ daughter, Laurel, now in possession of the documents, decides to go on her own to seek help and try to apprehend the traitors who have imbedded themselves into trusted positions in France.

In 17th-century France, we all think we know how that is going to turn out—a beautiful young woman alone, a marquise, riding across the country and searching various inns along the way. But when the musketeers happen onto the scene where Laurel is caught up in a sword fight for her life with some brigands, and seems to be winning, we soon realize nothing is as we expect, and the mundane mission is no longer that.

Sure, it’s a great adventure story, but it’s more about the people the reader meets and comes to love or hate. Impetuous, headstrong Laurel insinuates herself into the tight knit musketeer group of Aramis, Porthos, Athos, and D’Artagnan, and soon proves herself quite valuable in their quest for the traitors. Soon Aramis and she can’t decide if they are attracted to each other or not, and we don’t need that complication when their lives are in peril on a daily basis. You’ll love the human interactions as well as the excitement and danger of the story, and at the end will feel you have acquired some great new friends—along with saving France.

This is a good book. I liked it a lot. There were people in the story I could connect with and I really felt I got to know them. The story and action are interesting and fun with stubborn Laurel, who is a master fencer, and then her on-again off-again relationship with the musketeer, Aramis, as they try to find the spy who will betray France. It has excellent pacing and each chapter ends with just the right amount of mystery. I'm now reading the next book, Gambit For Love of a Queen, and am finding it, so far, another great read.

(reviewed 9 days after purchase)
Christopher Moss (formerly Nan Hawthorne) reviewed on Aug. 14, 2010
(no rating)
This is definitely a novel for fans of The Three Musketeers. It's written well and fun and mostly in jokes and stories meant to appeal to the enthusiast. I am not a particular 3Ms fan, so it wasn't for me, but definitely might be the cat's meow for you.

Meet new friends that you will instantly fall in love with. The book has excellent character development. Escape from the hustle and bustle of the 21st century to the romance and adventure of the 17th century. Lady Laurel is a musketeer in her own right and is forced on a perilous journey to save France from a devastating war. I enjoyed feeling I was part of the adventure with all four of the three musketeers as if they were my personal friends. Glad I found this author on Smashwords.

If you like the intrigue of the 17th century stories with the musketeers, you will love this story. It has all the swashbuckling sword play you want and the skullduggery of the Scarlet Pimpernel to boot. The leading character is a young woman that carries herself as an equal to the dashing musketeers she so wants to impress.