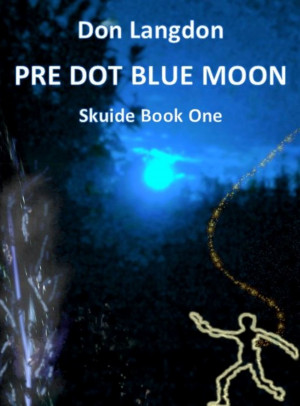 By Don Langdon
Have a politically incorrect stomp on an alien world. The voluntary (OK, ‘Shanghaied’) Skuide force nearly arrive but opt to do a straw poll. Those results give rise to Dukiesland, their pre arrival colony. They are not human but are they just and incorruptible. How do three people disappear from Dock’s hospital? Why is this glade protected? Who is shooting at who and why? Patriotism or drugs… More
When making something for the first time, like a Universe, there is always a bit of a mess which is pushed aside until you find time to tidy up. We all know what happens when we put down string without first winding it up, it forms a knotty problem. There we have it, two phenomena contributing to an unwanted outcome. Worse still, it was sentient and wanted a meeting on self-determination with the boss. Life is not easy when the Skuide are involved.
The holistic Sentients’ Charter was signed, sealed, delivered and forgotten. The tendency of new sentients to war with everything, including each other, is now well known. Extinction is the usual outcome but the Skuide stopped, mores the pity, and became self-appointed Charter busybodies.
The Charter’s co-signee, having discovered a wrong end, manages some outlandish odds to…ah… recruit the Skuide. They notice but go along with it anyway. Longevity has its drawbacks and misadventure is more exciting, especially when you make the rules, well guidelines or something approximating to that.
The Skuide, therefore, arrive a thousand years earlier and monitor the current present to ensure they do not significantly alter it. After 999 years Dukiesland is decidedly out of step with its progressively politically correct neighbours and is preparing for a Blue Moon Market. The Dufferish state of Stanniscan is on its ides break, Hoggeralia is back at work and Musolivy is readying for their tug-of war championship. All in all, some happy states of affairs.
The laziest Skuide, Twit, arrives to have another go at planetary ‘life.’ His ‘uncle’ decides to leave him running his cattle farm. Two missing hospital patients and an unknown doctor later, finds Twit roped in as the Chief of Detectives. Why are a doctor and a missing patient persuading a deported Stannish gang to sneak back into Dukiesland?
In Hoggeralia, the newly formed ‘We Find Them Detective Agency’ have been sold a comp-puter at a car boot sale and they have their first case - find Annabella Umbridge who disappeared 20 years ago. They outrun the Hoggeralian secret police and end up in Dukiesland slightly before the borders are closed. Dufferdom has declared war on Dukiesland.
Meanwhile, Dukiesland’s finest watch the Stannish gang and others get into a protected Wilderness zone. Twit’s team then rescues some innocent detectives caught up in the turf war. The on the spot pre-trial hearings bring the Stannish flower power gang and their co-conspirators to account, along with a cavalcade of Hoggeralian tiddly tea smugglers. The formal trials begin with the silicate defence counsel finding excuses for everything. The extra-universal Skuide return and intervene to demand justice. The guilty do their CRAP (Convict Rapid Ageing Process) time before being invited to the Blue Moon Market.
The Market is in full swing as Twit finally understands the other missing patient. Fate ensures Annabella is reunited with her parents. Prop marries Daisy as her bud ring flowers.
Has anything changed? Gabriel Galesac’s life has. Is that significant?
Available ebook formats: epub mobi pdf lrf pdb txt html
Price: $2.99 USD
Buy Add to Library Give as a Gift
How gifting works
Create Widget
Tags: romantic comedy spies time travel politically incorrect crime comedy scifi comedy it technology justice system parody alien skuide story flower power and drugs
About Don Langdon

Don Langdon was born in England and is sociologically classed, by the media pigeonholing services, as a baby boomer. He disagrees, his playground was amongst the bomb sites not in the bomb shelters so he believes he missed the boom.
Since graduating from university he has lived on three continents and spent a quarter of the last three decades traveling on business covering four continents. However, he is at pains to point out that he has not fashioned any of the characters he has written about on any single living soul.
His first forays into writing were technical papers and later translating technical papers into easy to read marketing blurb. A change in career direction meant that his first major publication, a software manual, was given away with the software. He does not believe that they gave the software away with his manual.
Now he has turned his innovative scientific mind to science fiction and has created, with his first two novels, the politically incorrect satirical parodies called 'Pre Dot Blue Moon' and Pre Dot New Moon, which are books 1 &2 in the Skuide series.

You have subscribed to Smashwords Alerts new release notifications for Don Langdon.

You have been added to Don Langdon's favorite list.

You can also sign-up to receive email notifications whenever Don Langdon releases a new book.