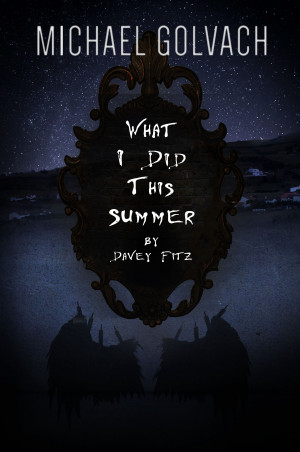 What I Did This Summer by Davey Fitz

By Michael Golvach
Rated 5.00/5 based on 1 review
Summer vacation is a time to relax and enjoy time off from school. But it's not always fun and games. And sometimes it can be a living hell.

SPECIAL NOTE: For all my works, paid or free, leave a review when you finish reading. Bad or good, I appreciate every one greatly!

I am a freelance writer, living in Grayslake, Illinois. I'm an award winning author of several books, screenplays and many short stories.

My latest novels "Dormir" and "Transmissions" were released 9 November, 2020 and 26 January 2021 respectively. Since "Dormir" is printed under the Evolved Publishing imprint, you can find that book on their author page for me - https://www.smashwords.com/profile/view/michaelgolvach

Responses to both new books have been positive,but (especially with Transmissions) the texts are fairly lengthy, so the reviews are trickling in. Still, I'm glad to have new material out for my fans and even happier that folks are enjoying what they're reading. Nothing makes me happier than knowing I'm making someone else happy. If only for a small part of their lives. I can't describe how good it feels when someone tells me they're excited I have a new release coming out.

For those of you wondering where I went in 2020, I spent that year (most of the first half) writing, and the other half struggling through edits - The pandemic touched everything - It was almost like "Transmissions" was cursed.
My Novel "Home" was released 21 May of 2019 and is still enjoying good press. Though it didn't win as many awards as its predecessor, it took 3rd place in the BookViral awards out of all categories and I'm very proud of that book. I stepped out of genre (combined multiple again) and wrote what I didn't know I could write (which is always my goal) - "10-30" was released 1 April 2019 and won some awards, too. I'm losing track now. Or maybe the writing's becoming more important than the recognition.

My Novel "fiX" was released February 14th of 2017 and is still enjoying good press. Though it didn't win as many awards as its predecessor, Missing Pieces, I'm very proud of this book. I stepped out genre (combined multiple) and wrote what I didn't know I could write (which is always my goal)
****Long Listed (top 30) on BookViral Book of the Year (Best In Genre for its category) 2017***
***Honoree in the Book Excellence Awards 2017***
***Winner of two silvers and a gold in the Global Ebook Awards (Romance, Paranormal and Popular Ficion) 2017***

My Novel "Missing Pieces" was released February 14th of 2016 and is enjoying very good press.
***Winner of the Silver Medal Award in the Global Ebook Awards in Both The "Popular Fiction" and "Romance/Erotica" Categories 2016***
***Winner of the Bronze Medal Award in the Readers Favorite Book Awards in The "Romance-General" Category 2016***
***Short-Listed in the BookViral Book Award 2016 - Top 38 out of over 1000 Entrants***

My collection of short stories entitled "Bloody Gullets" was released June 2016 (It's really hard to get reviews when your book has 20 different stories in it ;)

Not so many months ago, I read for review Mr. Golvach's "Bloody Gullets," a collection of some of the most eclectic and macabre stories you can imagine. As I rated (5 Star) and wrote the review for Reader's Favorite International Book Awards, I felt a distinct comparison to an author that I'd loved to read in my youth, but couldn't pin it down.

Now, after reading "What I Did This Summer by Davey Fitz" the name of that author popped into my head. I haven't the literary background to point out why or how I have this sense of deja vu while reading Mr. Golvach's stories, but I distinctly feel Edgar Alan Poe in the room.

You have subscribed to alerts for Michael Golvach.

You have been added to Michael Golvach's favorite list.

You can also sign-up to receive email notifications whenever Michael Golvach releases a new book.