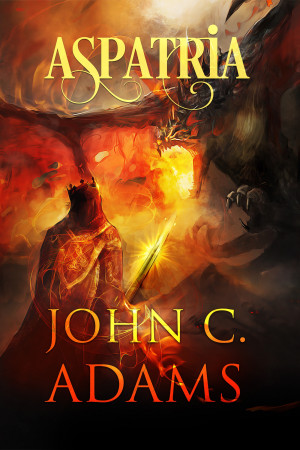 By John C Adams
Rated 4.25/5 based on 4 reviews
From British Fantasy Society Reviewer and double Aeon Award Longlister John C Adams comes a heartwarming fantasy tale, as love triumphs in the aftermath of carnage on the field of battle and blossoms into a delightful royal romance.

"As a writer of horror, fantasy and science fiction, John C Adams excels!"
Gavin Chappell, Editor-in-Chief, Schlock! Webzine More
When eighteen-year-old Dextra's stepmother Queen Maureen provokes her family back in Eira by sending an evil spell to kill her sister-in-law, it's only a matter of time before the desire for vengeance overcomes Crown Prince Brandon o'Eira and his brothers. Days later, after a particularly bloody assault on the Aspatrian royals, all Dextra's menfolk except her illegitimate half-brother Cenwulf Darkwater are dead at the hands of their old enemy.

Nobles loyal to Dextra see off a fledgling challenge from Cenwulf and she becomes queen, but in the face of continuing threats from Eira, and with worries about further invasions from other foes, her witan advise her to marry as quickly as possible.

Bachelor crown princes of all nations and ruler of Albina Khan Nicholai ride for Dextra's capital Brewchester, each hoping to win her heart and stand beside the most powerful young woman in the world as her husband. And widowed king Gortah van Murkar takes his youngest son Eugene and nephews Ludwig and Hedwig to meet Dextra and her sisters, hoping to forge a new relationship with an old adversary through marriage.

In agreeing to unite herself to a foreign prince or king to build a military alliance, Dextra admits to herself that she can no longer expect to become the wife of Marcus Longbarrow, who had been on the verge of proposing just before the Eiran invasion.

Dextra rallies bravely despite the unimaginable grief caused by the loss of her father Leofric, her uncle and both her cousins, and her three treasured brothers, Aelfhelm, Edwin and Oswy. Guided by her witan, which includes her redoubtable aunts, she meets each of her suitors and heroically strives to put the welfare and security of her people before her own feelings. Even though the young princess is brokenhearted at no longer being able to marry her childhood sweetheart, she still cherishes the hope that true love may blossom with one of the princes arriving to meet her.

Despite Gortah van Murkar's insistence that she marry his son, Dextra rejects Prince Eugene and engages herself to Gortah's adopted nephew Lord Ludwig Berg instead. While Gortah approves this unconventional and unexpected love match in the interest of securing a longlasting alliance between Murkar and Aspatria, he has forgotten that an Aspatrian monarch is entitled to two living spouses. Ludwig is happy to agree to this, but Dextra's insistence that she honour her Aspatrian heritage by taking a second husband soon puts tension between her and Gortah, when the widowed king remains in her capital to offer counsel about improving the parlous state of her army.

Guiding Dextra in her early days as queen throws Gortah into her company more and more. Gossip swirls around Brewchester that the king has lost his heart to her. But he still pines for the wife he lost a decade earlier, and pride also prevents the most powerful man in the world from becoming the second husband of Aspatria's young queen. Her admiration and regard for him grow, but he is incapable of overcoming his objections to her marrying twice. As their feelings deepen, his misgivings at sharing her boil over, and on the eve of riding into battle at the head of her army against the invading Albins, he provides her with an ultimatum: she can marry him or Ludwig, but not both.

Dextra is torn between her suitors. Each is so different, yet she has fallen deeply in love with both. Ludwig is handsome and gentle, charismatic and fun, and she longs to give him a happy adulthood to compensate for his pain at being abandoned as a baby. But only Gortah can understand the loneliness of her position as sovereign and the demands it places upon her, and the more time she spends around him the more she realises how essential it is that she persuades him to put aside his pride, his grief and his jealousy and learn to share her with a husband of her own age.
Download: epub mobi (Kindle) lrf more Online Reader
pdb txt
Price: Free! USD
Add to Library
Create Widget
Tags: romance fantasy epic fantasy romance ebook fantasy epic sword sorcery series fantasy free romance fantasyromance fantasy heroic
About John C Adams

(reviewed 29 days after purchase)
Midnightadams reviewed on May 12, 2020