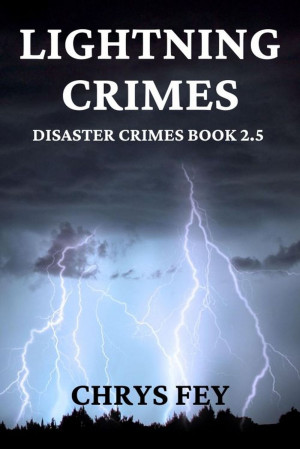 Lightning Crimes is a short story (22 pages) set between Seismic Crimes (Disaster Crimes Book 2) and Tsunami Crimes (Disaster Crimes Book 3). During a freak lightning storm, someone breaks into Beth and Donovan's apartment while they are home. What does the intruder want? And will Beth and Donovan came face-to-face with the culprit? More
*Lightning Crimes is a short story set between Seismic Crimes and Tsunami Crimes.

A freak lightning storm unleashes its energy on Central Florida. Bolts of lightning crash to the ground. Torrential rain soaks everything within seconds. And the power goes out, casting Beth and Donovan’s apartment into darkness. Beth is already on edge after receiving a menacing phone call several months ago, and this storm doesn’t help with her nerves.

Donovan tries to distract her from Mother Nature’s tantrum, but someone else has other plans. When they find the front door to their apartment wide open, they soon realize it isn’t an accident. Someone is in their apartment with them.

What crime can happen as fast as lightning?

Chrys Fey is the author of the Disaster Crimes Series as well as these releases from The Wild Rose Press: 30 Seconds, Ghost of Death, and Witch of Death. She is an administrator for the Insecure Writer's Support Group and heads their monthly newsletter. She is also an editor for Dancing Lemur Press.

When Fey was six years old, she realized she wanted to be a writer by watching her mother pursue publication. At the age of twelve, she started writing her first novel, which flourished into a series she later rewrote at seventeen.

You have subscribed to alerts for Chrys Fey.

You have been added to Chrys Fey's favorite list.

You can also sign-up to receive email notifications whenever Chrys Fey releases a new book.