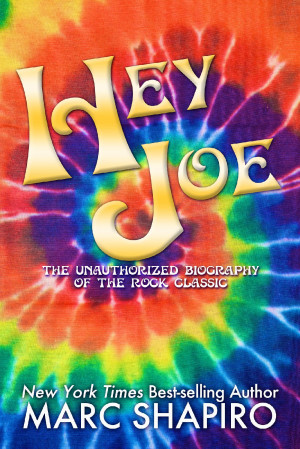 Part, history, part mystery and part memoir, the book Hey Joe: The Unauthorized Biography of a Rock Classic by New York Times bestselling author Marc Shapiro is, through extensive and exhaustive research that included the memories of countless well known musicians who were part of the Hey Joe odyssey, a detailed look at the history of Hey Joe, the song that few have ever thought to think deeply about and the rumors, legends and outlandish tales surrounding the song that ultimately culminate in the ultimate question…

Hey Joe, where you going with that gun in your hand?

In Hey Joe: The Unauthorized Biography of a Rock Classic readers will learn…

The family tree of songs that spanned decades and finally spawned Hey Joe.

Who actually wrote the song?

How close Hendrix came to not recording Hey Joe.

The mystery of who actually recorded the first version of Hey Joe. No it was not The Leaves. Would you believe Kim Fowley? Or The Surfaris?

What a very young Bruce Springsteen had to do with the song.

Nearly 3000 versions of Hey Joe, familiar, obscure and, in many cases, downright impossible to find, have been recorded and released.

Marc Shapiro is the NY Times best-selling author of J.K. Rowling: The Wizard Behind Harry Potter, Justin Bieber: The Fever! and many other best-selling celebrity biographies. He has been a free-lance entertainment journalist for more than twenty-five years, covering film, television, and music for a number of national and international newspapers and magazines.

You have subscribed to alerts for Marc Shapiro.

You have been added to Marc Shapiro's favorite list.

You can also sign-up to receive email notifications whenever Marc Shapiro releases a new book.