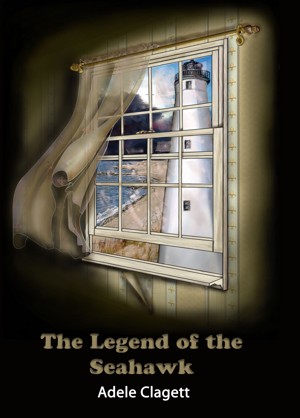 The Legend of the Seahawk

By Adele Clagett
Rated 4.50/5 based on 2 reviews
In the small Connecticut seaside town of Stuart Cove, David meets a fisherman. This old man has a story to tell about a lighthouse keeper named Danny and the loss of the fishing vessel, Seahawk. She went down during a storm back in 1956, but as the old man says, “That doesn’t tell the whole story.” David finds his life forever changed by this tale and the spirit of the Seahawk’s captain.
Available ebook formats: epub mobi pdf rtf lrf pdb txt html
First 20% Sample: epub mobi (Kindle) lrf more Online Reader
pdb
Price: $2.99 USD
Buy Add to Library Give as a Gift
How gifting works
Create Widget
Tags: mystery paranormal lighthouse fiction seaside town ghost
About Adele Clagett

Adele Clagett was born in Annapolis, Maryland. A dream she had back in 2005 inspired the story of the Seahawk. She currently lives on Kent Island, which is located in Maryland.

The Legend of the Seahawk
In the small Connecticut seaside town of Stuart Cove, David, a young ambitious professional takes a short leave of absence from his job at the New York Daily Press to settle his elderly aunt's affairs after her death. Upon a visit to the Fishhook Pub, David is approached by an old fisherman. This old man has a story to tell, a story about a lighthouse keeper named Danny and the loss of the fishing

Reviews of The Legend of the Seahawk by Adele Clagett

Adele Clagett’s The Legend of the Seahawk comprises the elements of fiction and a narrative style that makes it an ideal story for a Hallmark Hall of Fame movie. While few seafaring ghost stories have the substance to hold my interest very long – because they all seem to focus on the same elements of the genre – characters feeling cold whenever visited by a ghost- or spirit-like energy, Clagett’s narrative is different from many others that I have read. Skillfully combining facts about lighthouses, the life of lighthouse keepers and their families, and the story of the Seahawk with its paranormal aspects – psychic readings, residual haunting, non-intelligent ghost entities - Clagett has created a seafaring ghost story that is interesting, compelling, and illuminating.

As I delved into the text, I was reminded of the other ships that had been lost in the 1950’s – My Lady in 1952, and The Echo III in 1955 – and the movie The Perfect Storm. Like The Perfect Storm, Clagett gives the reader a basic seafaring tale: On August 1, 1956, while trawling for fish, a storm unexpectedly shifts its direction and catches the Seahawk out at sea before it can return to port at Stuart Cove, a small New England town situated on the coastline of Connecticut. Captain Scott Spear and his crew of five are lost to the sea. His wife, Helen, his daughter, Cynthia, his brother-in-law and lighthouse keeper, Danny Pierce, and the townsfolk were deeply affected by the incident.

I thoroughly enjoyed Clagett’s milieu of Stuart Cove, which included Saint Margaret’s Church, the fishermen’s memorial - a small circular area, consisting of a flower garden, a few benches, a granite tablet etched with the names of those from Stuart Cove lost at sea - the Fishhook Pub, the Stone Ridge Lighthouse, and Main Street. I particularly enjoyed Father Kealy’s prayer and the blessing of the fleet, the description of the waterfront, the feast, the floats, and Saint Andrew’s statue – the patron saint of fishermen. Here, everyone knows everyone else’s business – there are no secrets in Stuart Cove - creating a sense of closeness, friendliness and intimacy.

Hence, it isn’t very long after David Parker, an investigative reporter who works for a newspaper in New York City and who returns to Stuart Cove to sell a house on Kings Creek he had inherited from his Aunt Gina and Uncle Walter, that you’ll come to realize that, aside from a seafaring ghost story, Clagett has fashioned a delightful tale of romance that springs up between David and Claire Reid, a young woman who lives in Stuart Cove, attends college, and works at the Stone Ridge Lighthouse.

The scene at the Fishhook Pub, where David and Danny Piece share a few beers, is hauntingly mysterious. Later, at the fishermen’s memorial, Danny approaches David, as he is reading the memorial, and proclaims, “That don’t tell the whole story.” David agrees to meet Danny at the lighthouse the next day, at which time, Danny reveals a portion of the truth of what happened on the night the Seahawk was lost. Intrigued by the old fisherman and his legend, David believes he might write a story about the Seahawk for his newspaper.

Realizing that he would have to conduct his own investigation, David solicits Claire’s help and together they work to uncover the truth behind the paranormal occurrences surrounding the Seahawk.

To help him solve this paranormal mystery, David solicits the assistance of Owen Skinner, a paranormal investigator who lives in New York City, and Emerson Hathaway, an expert in lighthouse restorations.

The anticipation of what was to follow is electrifying, and as I read the narrative, I felt goose bumps running up and down my arm, and the excitement David and Claire must’ve felt as they approached the shoreline the day after the storm. I shan’t reveal the ending, but you will certainly enjoy and appreciate Clagett’s resolution and the closure it brings for Helen, Cynthia, and the townsfolk of Stuart Cove.

Overall, I highly recommend Adele Clagett’s book, The Legend of the Seahawk, to all readers, and I’m sure that, after you read this story, you will feel as strongly as I do, that this story is a wonderful tale – one that might easily lend itself to a wonderful Hallmark Hall of Fame movie.

You have subscribed to alerts for Adele Clagett.

You have been added to Adele Clagett's favorite list.

You can also sign-up to receive email notifications whenever Adele Clagett releases a new book.