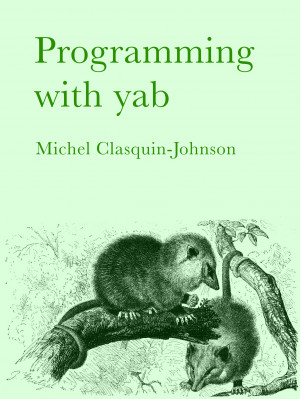 The joy of yab is that it remains a procedural language, in which instructions are followed one by one, starting at the top. Despite that, you can do things with it for which you would normally require a much more complex object-oriented language. The object orientation is all hidden in the operating system, and the programming language simply accesses it. Once you become used to this, it is quite addictive.

For example, with yab you can create a basic notepad in about twenty lines of code. When you right-click on that notepad, you will see the options to cut, copy and paste text in a context menu, even though you never programmed it in. It is simply a necessary part of what every text editing area in Haiku needs to be able to do, and every text editing area inherits that ability. This is object orientation, but you, the yab programmer, don't need to worry about the convoluted code it actually requires.
This makes yab a unique programming experience. There are languages on other platforms that come close. Applescript, for example. But nothing is quite like yab.

Michel Clasquin-Johnson is a Professor of Religious Studies at the University of South Africa and was, until recently, the entire Buddhological establishment on the continent of Africa. He lives in Pretoria, South Africa with his wife, son and two motorcycles.

Michel likes to think that he practices Buddhism (in his own way) as well as writing about it. The entire Buddhist world disagrees, but is too polite to say so.

In his spare time, he writes what can loosely be called science fiction. Not a lot of science involved, and a fine disregard for the rules of fiction.

He also writes application software, but only for utterly obscure and/or obsolete operating systems that are never going to lead to a payday. Let's hope he hangs on to his day job.

Reviews of Programming with yab by Michel Clasquin-Johnson

You have subscribed to alerts for Michel Clasquin-Johnson.

You have been added to Michel Clasquin-Johnson's favorite list.

You can also sign-up to receive email notifications whenever Michel Clasquin-Johnson releases a new book.