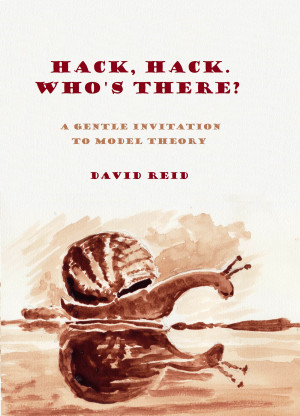 Hack, Hack, Who's There? A Gentle Introduction to Model Theory

By David Reid
The skeleton of this narrative nonfiction book is a science fiction story without the usual mangling of physics. The flesh is composed of self-contained non-technical mainstream explanations and examples of the field of mathematics which deals with meaning, called Model Theory. Technical terms are avoided, except to occasionally serve as keywords. More
“Hi, Joan. What’s the book you’re reading?”
“A mathematics popularization. Do you want to download it?”
“Mathematics! Forget it! I hated it in school. Couldn’t understand all those symbols.”
“No, no, there are no formulas. This is about sets and logic....”
“Oh, that. I know those. Puzzles and Venn diagrams.”
“No, no. None of that. It is about Model Theory.”
“Machettes? Fashion models? Economic models?”
“No. A better name might be ‘the theory of interpretations.”
“OK, but long explanations put me to sleep. I’d rather read a novel.”
“Understood, which is why the explanations are part of a story. It’s not really a novel, not just explanations, but a hybrid, called narrative non-fiction.”
“The kind where the numbers are personified and dance around...”
“No, the story is a science fiction one which could stand on its own without the explanations, although it would end up being more a short story.”
“Why science fiction?”
“Apparently that gave the author the possibility to take examples from different fields.”
“Also physics? Usually science fiction has all sorts of popular elements such as wormholes, and ...”
“The story also uses some of these, but not in the fashion of most science fiction. Nor is the reader expected to check a good explanation of them before reading. The story includes brief non-technical explanations of these concepts.”
“Hm. That may be well-meaning, but all those scientific terms, to someone like me without the necessary background, come out sounding just like the meaningless technobabble of science fiction or even some philosophy books which are written for other philosophers.”
“No, most terms are paraphrased, and the few that remain are also explained.”
“Why leave in any at all?”
“The author explains that they are meant to serve as keywords in case someone wants to look more into them.”
“What, no biography or ‘recommended further reading’ list?”
“No, in the Internet Age, you have a greater selection by using a good search engine. After all, the ideas explained are all mainstream.”
“The author isn’t pushing his own agenda with some new fringe theory? So what’s original here? Why would I bother to read it?”
“Model Theory is almost never popularized. Elsewhere you may read of the occasional idea out of Model Theory, but usually just as isolated as a Trivial Pursuit fact.”
“OK, but why should I think that this author can do a decent job of explaining to a layperson like me?”
“He has been doing this all his life, as a teacher of mathematics and physics in secondary schools around the world, adjusting his teaching to different mentalities and cultures.”
“OK, I’ll give it a try. Give me the link.”
Download: epub mobi (Kindle) pdf more Online Reader
lrf pdb txt
Price: Free! USD
Add to Library
Create Widget
Tags: logic nonfiction narrative narrative nonfiction popular science logicalmathematical intelligence model math
About David Reid

After a couple of academic degrees in the US, I started wandering around the world, occasionally working -- sometimes in my profession of teaching secondary school mathematics and physics, sometimes in another subject, usually other sciences or English, but occasionally something entirely unrelated to my profession -- sometimes studying further at institutions in various countries and in various languages (having learned a few along the way), and sometimes just low-budget traveling. On the face of it, I seem to have settled in Israel, although I still travel abroad most years, but one never knows..... Academic interests include not only mathematics and physics (more the weirder stuff, like mathematical logic and quantum physics), but also philosophy (which is why I need maths and physics) and literature (of various cultures). Other interests, besides obviously travel, include swimming and various other activities.

You have subscribed to alerts for David Reid.

You have been added to David Reid's favorite list.

You can also sign-up to receive email notifications whenever David Reid releases a new book.