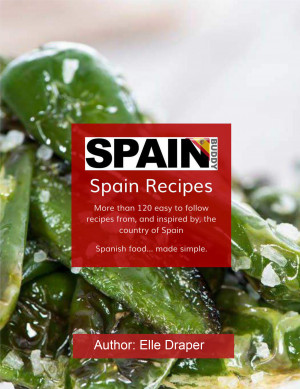 Elle is an amateur cook, but someone who is a huge lover of food and spending time with friends across a dinner table. Her ethos is that time should be spent with your visitors – not hidden away in another room, only emerging when dishes are placed on a table. This book makes that possible, providing recipes (each with a full colour photograph), in a step by step format.
Available ebook formats: epub mobi pdf lrf pdb html
First 10% Sample: epub mobi (Kindle) lrf more Online Reader
pdb
Price: $5.49 USD
Buy Add to Library Give as a Gift
How gifting works
Create Widget
Tags: cooking recipes spain spanish cooking spanish recipes spanish food spain cooking spain food spain recipes
About Elle Draper

Elle Draper lives with Alan and their three dogs in a beautiful village in the hills of Almería in southern . Together they run Spain Buddy, a website full of information about this amazing country that they are proud to call home.

Elle loves to work miracles (she’s stuck working on turning water into wine though) and sometimes she wears a superhero cape. She loves dogs, wine, a massive variety of cuisines and her “Alan” (although not necessarily in that order). She has been known to throw shoes and half the stationery cupboard but generally is very chilled out.

She is a devoted friend, but a lethal enemy and her bite is way worse than her bark.

Elle has a geeky side too and gets very excited about Doctor Who. She is also unashamed to admit she loves a bit of trashy telly.

Elle is one of those sickeningly chirpy optimistic people, seeing the best in everyone and, while others view their glasses as half full, she sees hers as an opportunity for a top-up of more wine or vodka and usually gets a round of shots in while she’s waiting.

You have subscribed to alerts for Elle Draper.

You have been added to Elle Draper's favorite list.

You can also sign-up to receive email notifications whenever Elle Draper releases a new book.