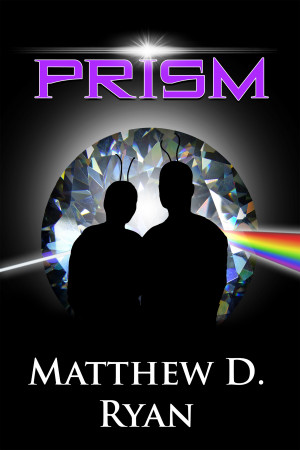 By Matthew D. Ryan
Rated 4.33/5 based on 6 reviews
The Heart Crystal was the Key. If only, young Shardshaper Apprentice Akarra could master it. In Prism the people are made of quartz. And that's just the beginning. Explore the very boundaries of imagination. "In a spectacular leap … Ryan creates an entirely new form of life…" Don't miss out. Buy Prism now. More
Love or Destiny? That was Her Choice.

Long ago Akarra had set her heart on becoming Shardshaper even though that meant a life of solitude. But now, things have changed. She's in love with the Chieftain's son. She still wants to be Shardshaper, but oh, how she longs to share her soul with him.
Love can be such a bittersweet reality. And yet, where would we be without it? And is not part of its appeal, the sacrifices it forces upon us? Watch the struggle and feel the weight of sacrifice threaded throughout this tale.
"The characters are simply amazing and I found myself enthralled by them." Find out what the fuss is about. It is an unusual setting with unusual characters dealing with problems we all know so well. It's a must have.
Buy Prism now.
L
Available ebook formats: epub mobi pdf lrf pdb txt html
First 30% Sample: epub mobi (Kindle) lrf more Online Reader
pdb
You set the price! USD
Buy Add to Library Give as a Gift
How gifting works
Create Widget
Tags: mystical destiny fantasy magic myth quest noble prism matthew d ryan
About Matthew D. Ryan

So, if you like vampires or dragons, or are just into the fantasy genre in general, I'm your guy. Download one of my books now. I heartily recommend Drasmyr.

I received this book for free. First of all, this book is completely different from any book I've ever read. Second, I definitely enjoyed it. I really loved the descriptions of the Quartzians and their environment. The only thing that I had some trouble with was some of the shape names, but then the description of the shape helped me to visualize it. I love that there was a little mystery involved in the story line. The characters were well rounded and interesting and the use of colors as indicators of emotion was lovely. It is short, but shouldn't be a fast skim over. Take the time to read and understand, visualize it. It's totally worth it.

AN ADVENTURE IN THE WORLD OF GEOMETRIC CRYSTALS.

This is the story of Akarra, a female quartzain, inhabiting an underground realm known as The Cavern. She has been receiving training in creating various geometric shapes made of quartz from her mentor, Yridia, the current Shardshaper - a healer, protector, and servant of the people. Yridia is dying and the mantle of Shardshaper will pass to Akarra. Before that happens she must go on a quest protected by the Chiefton’s son, Thaygos. Akarra and Thaygos are in love and planned to be united. Akarra faces three challenges. The journey to the Cave of the Heart Crystal where she will receive her Heart Shard. The second solving a riddle when she arrives at the Cave of the Heart crystal. The third is her relationship with Thaygos. In order for her to take on Yridia’s role as Shardshaper she will not be allowed to unite with Thaygos, for she will become a servant of the people.

On the journey Thaygos and Akarra have several discussions about their relationship. Conversation between Thaygos and Akarra is filled with emotions. In addition they encounter evil Lighteaters on their journey providing some tense action scenes.

The world, its inhabitants, their relationship, and traditions are established in the first chapter. The language is clear and convincing when it comes to the interaction of Akkara, Thaygos, and Yridia. I found the description of geometric shapes difficult to follow and does not appear to add much to the story. A glossary accompanies the text, but leaves out a definitions of Lightshards, Deathlight, and Lighteaters. The reader must discover these from the text.

On the whole the story flows well. It kept my interest as the classic themes of relationship - personal love versus obligation and duty tied to Akarra’s Quest unfolded. I enjoyed this story but found the descriptions of the geometric shapes distracting.

I really want to give this book 4.5 stars. I really enjoyed reading this story. It's a bit different from what I usually read. The characters are simply amazing and I found myself enthralled by them. I hope there will be more to this storyline. I received this ARC for my honest review.

I was very fortunate to receive a copy of this original story as an ARC (Advance Review Copy). This charming tale of a couple of young cave dwellers is a coming of age story filtered thru an ode to geology. In a spectacular leap of imagination, Ryan creates an entirely new form of life which, perhaps inevitably, nonetheless flows in channels not unlike those in which our own hopes and fears reside. His short story is a fascinating break from the usual fantasy settings, almost abutting the realm of science fiction. Like all short stories, it is over almost before it begins, leaving at least this reader craving an extended version and backfill.

This is very different from the other stories I have read by Mr. Ryan, but I enjoyed reading the ARC I received from him thoroughly. It is slow moving (which is why I gave it 4 stars) and has great detail about a brand new world Matthew has created. I can tell you he keeps surprising me with where he goes with things in his books. There is a lot of very emotionally charged choices that the main character, Akarra, has to make and I was very impressed with her strength. Prism was well written, and worth checking out.

Via the courtesy of Matthew D. Ryan, I was able to read this book prior to its release. My copy is an ARC copy (Advance Review Copy) and was received in exchange for my review.
Prism is a fun, imaginative novella. I've been a fan of Ryan's writing since earlier this year when I started reading his From the Ashes of Ruin series, and I must say that this short story, while unrelated, is just as good. I loved it! While it's a work of fantasy, you won't see any elves or orcs here. Instead, the cast is comprised of beings of Ryan's own creation: quartzians, creatures made of crystal whose antennae flash different colors based on their emotions. There are also the mysterious, malevolent Light-Eaters. The world of the story is the Cavern, a fascinating subterranean realm in which crystals are found naturally in various geometric shapes. I won't go into depth with the plot, to avoid spoilers, but the story is exciting with an interesting twist that I didn't expect.
One of Ryan's greatest strengths as an author (in my opinion) is his characters. I really cared about Akarra and Thaygos, and the dilemmas that they faced. Although I will admit that I am not a detached reader by any means, I feel like their characterization was done well. They feel relatable, like a human, yet they are not so anthropomorphized that you forget what species they really are. Furthermore, the conflicts throughout the course of the novella are both internal and external, and it’s a nice balance. Through the conflicts, the characters grow closer to one another, and we as readers grow closer to them.
Ryan also does a great job with worldbuilding. Building a setting from scratch is no easy task, yet it's essential for any writer of speculative fiction set in another world. The world of the Cavern is one that can set your imagination on fire and that you will want to explore more. Hence, I hope that he writes a sequel at some point, or another story set in the same world. You can certainly tell that the world extends far beyond the realm of the story itself.
Really, the only weakness I could find was a minor level of difficulty keeping track of all the geometric shapes that the Cavern's crystals were comprised of. I had never heard of quite a few of them. But that can be solved with a simple Google search or two. :) Other than that, everything was done really well.
Ultimately, I thoroughly enjoyed this book, and would highly recommend it to anyone -- especially if you loved Ryan's other works, such as Drasmyr. It's not nearly as dark as those, but it's still really awesome and a very fun read. 5/5 stars!

You have subscribed to Smashwords Alerts new release notifications for Matthew D. Ryan.