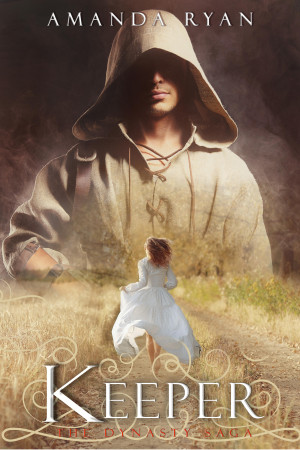 Amalia has kept her rare magical Keeper ability a secret, despite serving one of the most reviled lords of Aren. When a desperate bid for freedom goes awry, Lia strikes a deal with the handsome yet deadly Ilyas san Merin, the Right Hand to the Royal of Aren. Together they unravel a treacherous plot, and in the end Lia has to make a decision that will change not only her life, but the entire world. More
Aren is ruled by magic, a skill held by few and coveted by many. Magicians are powerless, however, without their Keepers – human conduits of power nearly hunted to extinction.

Amalia has managed to keep the truth of her rare Keeper ability a secret, despite serving one of the most power hungry, reviled lords of Aren. When a desperate bid for freedom is thwarted by none other than Lord Ilyas san Merin, the Right Hand to the Royal of Aren, Lia believes her luck has run out. The handsome yet deadly Lord Merin offers her a deal - help him track down a magical tome stolen from the Royal, and he will grant her asylum.

With no other choice, Lia accepts. Ilyas drags her across Aren in a frantic search to recover the ancient book, and in the process Lia learns she is not the only one harboring secrets. She is intrigued by the man and his mysterious methods, and before long Lia finds herself struggling to abide by the most important rule for Keepers who want to retain their freedom: remain untouched.

In uncovering a treacherous plot to launch Aren into civil war, Ilyas and Lia have little time to tread careful lines. Lia learns what it means to be a Keeper in a world rife with magic-hungry madness, and in the end she has to make a decision that not only will change her life, but also the entire world.

Amanda Ryan is a smut-loving, musical-theatre-singing, guinea-pig-herding writer who’s had stories stuck in her head since she was a little kid. Her head is often in the clouds, whether fantasizing about her next crazy story or belting out a rap from Hamilton while in her tiny red Fiat.

She launched The Raunch Dilettante in 2010 as a place to record her thoughts on the insane amount of smut she consumed. Now, TRD serves as her home base for all her past book reviews, and all information on her current and upcoming publications.

Amanda lives in Pennsylvania with her hubs, two cats, and a horde of guinea pigs. When she’s not writing, she’s working at her non-profit job, or teaching Zumba, or singing at a community theatre.

You have subscribed to alerts for Amanda Ryan.

You have been added to Amanda Ryan's favorite list.

You can also sign-up to receive email notifications whenever Amanda Ryan releases a new book.