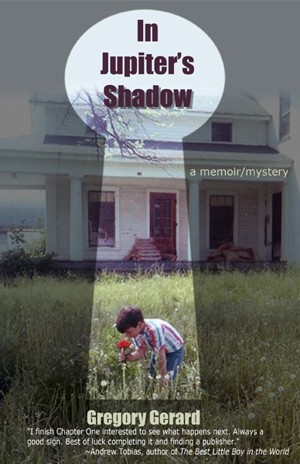 Gregory Gerard's work has been published by Tiny Lights, The Stone Table Review, and World Voice. He teaches writing part-time at Writers & Books, Rochester’s adult literary center, and has been a guest instructor at the University of Rochester's Scholars Creative Writing Program.

His memoir, In Jupiter's Shadow, chronicles a religious boy's struggle with forbidden attraction. It explores how we all receive messages about what we "should be" in life and how we sometimes work to hide truth from the most important person in our lives: ourselves.

Gerard lives in Rochester, New York, with his partner of eleven years and their spitz husky.

Are YOU living in Jupiter's Shadow?
Many of us work to hide truths from the most important person in our lives...ourselves.

Reviews of In Jupiter's Shadow by Gregory Gerard

‘I couldn’t solve the mystery of my sexuality.’

One of the literary pleasures of this year is the discovery of a gifted new writer by the name of Gregory Gerard. Though IN JUPITER’S SHADOW is his first venture into the world of the novel, Gerard gives notice of a writer of great skill and a mind capable of understanding and relating the manner of thinking and coping with the world that faces the developing young people of today. This is a story rich in content, in conveying the parameters of life in a family surrounded by the tradition of the Roman Catholic view of life yet sharing the many methods of hiding inconsistencies from the Confessional on the part of both parents and children, of the influence of the times between the years 1979 and 1984 on the maturing of teenagers, and of the struggle and turmoil of coping with sexuality that faces so many of the youngsters (and adults) paralyzed by the expectations of society. Yes, this is a coming of age story but it is so much more. With this book Gregory Gerard enters the arena of the best of authors who deal with the struggles of boys becoming men in Middle America (and throughout the country).

The main character, Greg, is a young lad who has always preferred living in the world of make believe, patterning his world view after the character detective Jupiter, a chubby but oh so wise and clever fictional boy who leads the pack in a series of books called ‘The Three Investigators.’ Gerard opens his book with some family background in 1973 where we meet his family – Drinking Dar the alcoholic father, The Booker his coping organized mother, his five older siblings including a delicate portrayal of a brain injured brother Paul, Greg’s sobriquet as ‘The Caboose’ (suggesting his place in line of a family that could have easily done without him), his funky Gram who has terms for everything, and the various priests whose influence is felt at every turn. From this starting point Gerard allows us to grow along with and accompany Greg through his adventures as a detective, as a boy who longs to be ‘normal’ but who prefers boys as his night dream stimulators for his forbidden acts of release.

Bouncing back and forth between the years 1979 and 1984 (a very clever and well devised method of introducing and explaining a child’s progress) Gerard comfortable takes us through Greg’s steps towards finding his identity: as Greg chronicles his life he writes in his journals ‘Gram’s death. Longing to be a priest. The Bathtub. Adam. Building Headquarters, Saint Mike’s graduation. Going to McQuaid. Robberies at Gerard’s Grocery. Prayers for normalcy. Backrubs with Bob. Roy’s death.’ Each of these notations represents featured incidents in the boy’s progress to find himself and become the man he is despite the stumbles in the way of his journey. This is a story of the rigors of accepting self, especially when that self happens to be at odds with society. Gerard has the sensitivity to allow the quasi-dysfunctional family to still bear the fond memories even the worst of families retain in each of our minds. He also is kind to the influences of the variety of priests from the Catholic Church who influence the various steps in Greg’s development. And he allows us to witness and experience the delicacy and trauma of falling in love, even when falling in love imports the same sex variety.

IN JUPITER’S SHADOW is one of those books the reader wishes would never end, so welcome and treasureable is the journey with Greg – a young man we all grow to love and admire. Filled to the brim with brilliant writing, with page after page of hilarious storyline, and equally suffused with sensitivity for issues of living and dying we all learn to face, IN JUPITER”S SHADOW is a little dream of a book. Very Highly Recommended for all readers.
Grady Harp, Los Angeles, California

You have subscribed to alerts for Gregory Gerard.

You have been added to Gregory Gerard's favorite list.

You can also sign-up to receive email notifications whenever Gregory Gerard releases a new book.