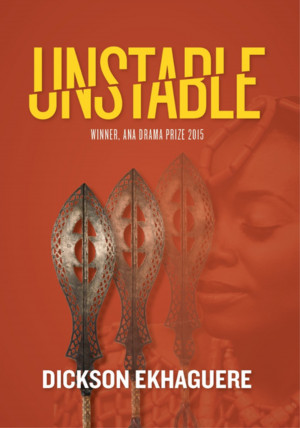 By Dickson Ekhaguere
To be able to love the UNLOVABLE, that is the essence of HUMANITY. More
UNSTABLE follows the story of a King who goes into an atypical affair with a rejected village harlot. An angry mob had dragged her before the King to be banished, instead, the king shields her in his palace and in an unexpected turn of event, he falls in love with her. The villagers and chiefs are angered by this “thoughtless” move and make several attempts to discourage the King, but he is not ready to cave in to the pressure from within his inner circle or from his subjects and proceeds to make her his queen. But this can only mean one thing for the highly revered King; his life or his throne.

DICKSON EKHAGUERE is an award-winning author & playwright, singer and entrepreneur.
Born and raised in the ancient city of Benin, Edo state Nigeria; Dickson Ekhaguere is a graduate of the University of Benin, Benin City. He is a gifted writer and playwright with several works (Published and Unpublished) to his credit. Most notable among his works is “UNSTABLE” - winner of the 2015 Associations of Nigerian Authors award for Drama, now an accepted text in variegated institutions of learning, including Universities and Colleges of Education. In 2017, UNSTABLE was premiered on stage and featuring a long list of stage veterans like Tina Mba, Olu okenkanye, Ropo Eweala, Segun Dada and many others. It was directed by the award winning director, Ben Tomoloju. Dickson's work GENERAL OLOGBOSERE was also named Runner-up winner in the 2017 Association of Nigerian Authors award. In a show of his boundless creativity, his sensational song titled ‘Unstable’ became the theme song for the Theater production of his award winning play “UNSTABLE”, and in 2017, another song by Dickson titled HAPPY won a music award for Best Pop Single.

You have subscribed to alerts for Dickson Ekhaguere.

You have been added to Dickson Ekhaguere's favorite list.

You can also sign-up to receive email notifications whenever Dickson Ekhaguere releases a new book.