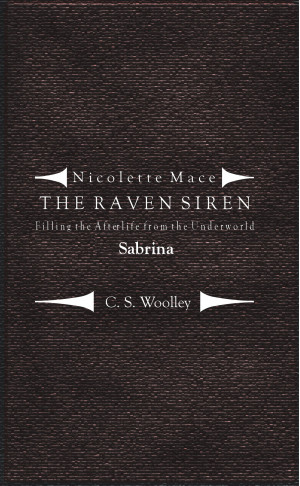 Nicolette Mace: the Raven Siren - Filling the Afterlife from the Underworld: Sabrina

With Sabrina trying to fly under the police radar and Harry determined to discover who Sabrina is, and why she is hanging around with Siren, this particular chapter of Siren’s life is one that is marked with more chaos and danger than ever before.

Join Siren, Fred, Harry and Sabrina as they dive into the criminal underworld. With so many people out to stop them, only one thing is certain, not all of them will be making it out alive.

"My name is Nicolette Mace, but you might know me as the Raven Siren. I'm a Private Investigator living the 1930s romantic dream in this new and exciting modern age. I keep records of everything that happens; everything I have seen and done. Why? There are more things in heaven and earth, Horatio, than are dreamed of in your philosophies."

Nicolette Mace: the Raven Siren series (in chronological order)
Beginnings
1. Medusa
2. Siren’s Call
3. Shadow
4. A Shot in the Dark
5. From Out of the Ashes
6. The Murder of Michael Hollingsworth
7. The Case of Mrs. Weldon
8. Hunting the Priest Killer

About the Series: Nicolette Mace: The Raven Siren

Nicolette Mace: the Raven Siren is a book series by author C.S. Woolley. Written in the first person, this modern twist on the private detective pulp novel brings a refreshing take on the film noir world. Nicolette Mace is the private detective known as the Raven Siren and the eponymous heroine of the five books that come together to create the main narrative of the series.

There is also a sub set of books within the Nicolette Mace: the Raven Siren series that come under the title of Filling the Afterlife from the Underworld. These books are shorter tales that are written to fill in the gaps between the stories in the main five novels and round out the universe that C.S. Woolley has created. Some of the volumes follow cases that the Raven Siren has taken on whilst others are comprised of shorter thoughts and exploits from the day-to-day life of the female private investigator.

Reviews of Nicolette Mace: the Raven Siren - Filling the Afterlife from the Underworld: Sabrina by C.S. Woolley

You have subscribed to Smashwords Alerts new release notifications for C.S. Woolley.