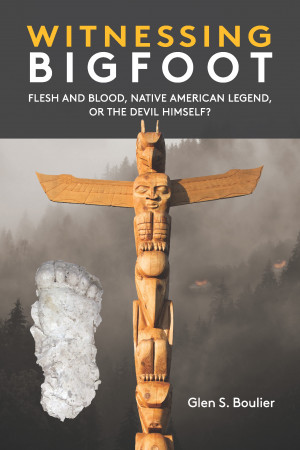 Witnessing Bigfoot: Flesh and Blood, Native American Legend, or the Devil Himself?

By Glen Boulier
Glen Boulier spotted Bigfoot twice near his home in Canada, starting his quest to find Bigfoot’s true nature. Years of research led to many stories, from brief meetings to long-term interactions. Tracks that end in snowfields and trail cameras with no images told him Bigfoot was more than physical. He talked with Native Americans, First People, and others. This book reports all that he found. More
Glen Boulier spotted Bigfoot two times on the roads outside his hometown of Penticton, BC. These sightings were the start of his quest to discover the true nature of the elusive creature. He spent years researching the stories, the legends, the speculations. He questioned people about their own particular experiences and interviewed researchers, hunters and trackers, forestry workers, and many others. Years of research led him to many stories, from brief encounters to long-term interactions.

When Glen learned about tracks that disappeared in the middle of a snowfield and the complete failure of trail cameras to capture an image, he knew then that Bigfoot was more than a rarely seen physical being of the woods. He dug in and went on to speak with Native Americans in the US, the First People in Canada, and others who knew about Bigfoot’s connections with the spirit worlds. Witnessing Bigfoot objectively documents what he found.

Glen wishes that the Bigfoot he saw was a simple forest creature, but the evidence seems to suggest that it is more. Now you can add Glen’s fascinating discoveries to everything else you know about Bigfoot and come to your own conclusions. The quest continues.
Available ebook formats: epub mobi pdf lrf pdb txt html
First 10% Sample: epub mobi (Kindle) lrf more Online Reader
pdb
Price: $18.00 USD
Buy Add to Library Give as a Gift
How gifting works
Create Widget
Tags: devil bigfoot nephelim sasquatch native american legends
About Glen Boulier

Glen Boulier was born in Summerside, Prince Edward Island. While his father worked in the Canadian Armed Forces, Glen lived in many parts of Canada and spent two years in Germany. He has enjoyed sports his entire life to include two free-agent tryouts with the Philadelphia Phillies and the Dallas Cowboys. Outdoor adventures include photography, mountain biking, astronomy, and camping where he enjoys renting fire lookouts in the Western United States. He currently lives in Vancouver, British Columbia where he is working on two new books in the company of his wife.

You have subscribed to alerts for Glen Boulier.

You have been added to Glen Boulier's favorite list.

You can also sign-up to receive email notifications whenever Glen Boulier releases a new book.