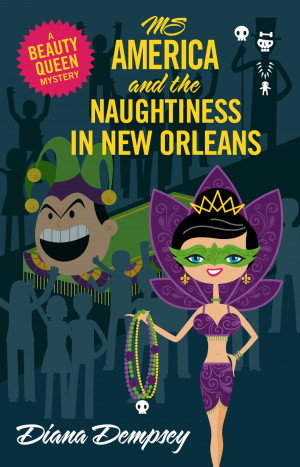 Ms America and the Naughtiness in New Orleans

All too soon Happy learns the centuries-old French Quarter is not all jazz, Creole cuisine, and cocktails: evil lurks there, too, even amid the pageantry of the Big Easy’s most gleeful season. Yet no ghost, vampire or even voodoo spirit will keep our scrappy beauty queen from nabbing the killer—not when the stakes are sky-high for someone near and dear to her heart.

Author Diana Dempsey never competed in beauty pageants but she did the next best thing: she worked in TV news. After a dozen years as an Emmy-winning anchor and reporter, Diana hung up her mic to become an author of fast and fun romantic fiction. Her novels have been called “almost impossible to put down” (Romance Reviews Today), “skillfully plotted and filled with realistic detail” (Library Journal), and “spicy, sexy, and sultry” (Booklist). Romance Writers of America nominated her first novel for a RITA award for Best First Book. Another was a Top Pick of Romantic Times and a third was a selection of the Doubleday Book Club.

Diana Dempsey traded in an Emmy-winning career in TV news to write fast, fun romantic fiction. Her debut novel, FALLING STAR, was nominated for a RITA award for Best First Book by the members of Romance Writers of America. It centers on the personal and professional travails—and eventual triumphs—of a primetime anchorwoman. TO CATCH THE MOON, a Romantic Times Top Pick, combines a murder mystery with a love triangle. TOO CLOSE TO THE SUN goes behind the glossy veneer of a Napa Valley winery to find forbidden love, intrigue, and betrayal. CHASING VENUS is a romantic suspense about Annie Rowell, who discovers that being a best-selling novelist can be a killer ...

Since Diana enjoys the occasional well-executed murder, she's launched a cozy mystery series. MS AMERICA AND THE OFFING ON OAHU introduces beauty queen and budding sleuth Happy Pennington, who must clear her name when her fiercest competitor tumbles dead out of the isolation booth during the pageant finale. The ongoing installments are MS AMERICA AND THE VILLAINY IN VEGAS, MS AMERICA AND THE MAYHEM IN MIAMI, and MS AMERICA AND THE WHOOPSIE IN WINONA.

In her dozen years in television news, the former Diana Koricke played every on-air role from network correspondent to local news anchor. She reported for NBC News from New York, Tokyo, and Burbank, and substitute anchored such broadcasts as Sunrise, Today, and NBC Nightly News. In addition, she was a morning anchor for KTTV 11 Fox News in Los Angeles. She started her broadcast career with the Financial News Network.

Born and raised in Buffalo, New York - Go, Bills! - Diana is a graduate of Harvard University and the winner of a Rotary International Foundation Scholarship. She enjoyed stints overseas in Belgium, the U.K., and Japan, and now resides in Los Angeles with her husband and a West Highland White Terrier, not necessarily in that order.

You have subscribed to alerts for Diana Dempsey.

You have been added to Diana Dempsey's favorite list.

You can also sign-up to receive email notifications whenever Diana Dempsey releases a new book.