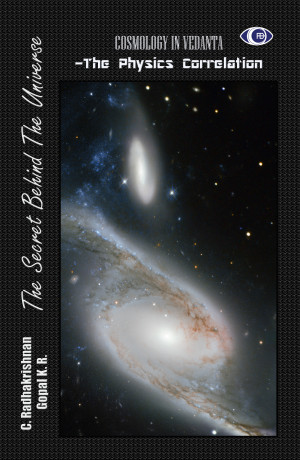 Cosmology in Vedanta - The Physics Correlation

By C. Radhakrishnan
This book contains Vedantic cosmology along with elaboration of the author’s physics article “Avyakta: The Fabric of Space” which explores the secrets of the universe through scientific study on Avyakta. The physics article was published in the Prespacetime Journal (ISSN: 2153-8301) Vol 7 Issue 16. More
Exploring the secrets of the Universe as far as physics can go, and even beyond.. Along with its Vedantic integration.

This book is divided into two sections. The first section is a work in physics which presents an in-depth exploration of Avyakta - the hidden metaphysical reality behind the apparent universe - through scientific study. A condensed version of this part has been published in the Prespacetime Journal Vol 7 Issue 16 on 08/01/2017, titled "Avyakta" The Fabric of Space"in which this concept of Avyakta is explained to complement the Standard Model and explain gravitation. This section of the book attempts to explore the role of avyakta behind various phenomena like matter waves, gravitation, energy in the vacuum state, spiral arms of galaxies, dark matter, Higgs boson and virtual particles which pop out of nowhere, big bang and cosmic inflation and the anti-particle.

(Prespacetime Journal (ISSN: 2153-8301), QuantumDream, Inc., P.O. Box 267, Stony Brook, NY 11790-0267, USA; is a physics journal which focuses on the origin, nature and mechanism of space-time and its possible connection to a prespacetime; and models and experimental results on elemental particles, fundamental forces including gravity and related topics.)

The second section of the book presents in-depth study of cosmology in Vedanta, as outlined in verses from the Bhagavad Gita and the Upanishads. A comprehensive work, the discussions shed light on many previously unknown levels and aspects. Since God cannot be considered in physics due to lack of experimental evidence, this section is provided as a separate part!

C Radhakrishnan is an established south-Indian writer. His works are deep, refined, original, evocative and inspiring despite their apparent simplicity and tacit humor. He was conferred the Murtidevi Award of the Bharatiya Gnanapith Trust for the best creative work in Indian languages. He has been recognized by India's National Akademi of Letters, the Kerala Sahitya Akademi and almost every other body promoting creative literature of the language he writes.

A scientist-turned writer, he has contributed to all branches of creative literature, mostly fiction, besides popular science.

His works have been assessed to be creative contributions to the science-philosophy dialogue. He has done a commentary on Bhagavat Gita (Gita Darsanam) critically approaching yogavidya in the light of modern science and, at he same time, also evaluating modern science vis-à-vis yogavidya.

He helped launch and establish Science Today (Times of India), the first popular science magazine of India, at a young age of 24, and later held senior positions with national print media organs.

He has a track record of winning in every literary competition during academic career. Translated Daniel Defoe (M. Flanders) and Lincoln Bernet (Einstein and the Universe) at age seventeen. Contributed popular science and creative copy to leading periodicals ever since. About sixty popular titles in various branches of writing, deep in content but simple in style, have followed, won acclaim, enriched the language and have always remained alive in the book market.A multi-faceted personality, he has worked as scientist, popular science journalist, film director, columnist, and editor of national and literary journals. As a film-maker, two of his four creations form part of the Indian Panorama of Feature Films.

You have subscribed to alerts for C. Radhakrishnan.

You have been added to C. Radhakrishnan's favorite list.

You can also sign-up to receive email notifications whenever C. Radhakrishnan releases a new book.