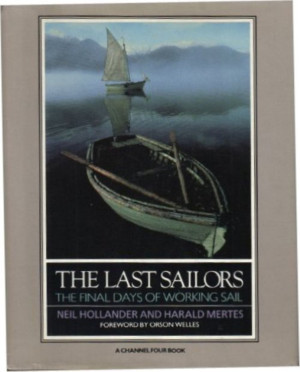 The Last Sailors: The Final Days of Working Sail

By Neil Hollander
In 1980, Neil Hollander embarked on a two-year voyage on board a 10m sailboat. With this boat he experienced the harsh side of boat-travelling in the Pacific and the toll that 25,000 miles take on your body. More
Born in 1939, Mr. Neil Hollander is the biggest name in the book-writing industry when it comes to watercraft and sailing. This man has crossed the seven seas and the four oceans in the world, only to fill that desire for knowledge, and experience the genuine discoveries that hide beneath the deep blue waters in the oceans.

To read the other books that Hollander has written go to Amazon and see his other books.

This particular title focuses heavily on his travels between 1980 and 1982. Not only did Hollander bring the magic to the white pages of the books, but he also got acknowledged by many sailors as a true professional in this field. His book can nowadays is considered as standard literature and is praised by many true salesmen around the world. His writing style is easy and the book can be easily read by non-enthusiasts or fans of this lost art.

The famous American French author Neil Hollander is a well known figure in the world of books. This author and film maker has created many books in his author-lifespan of 40 years. This life-long career, has changed Hollander into a war correspondent and a journalist, then later into a sailor and yachtsman, and also into a movie producer and director. His valuable experience makes him a rare breed among many professionals, because almost nobody can brag to be all of these titles above and write well-acclaimed books for kids in the same time.
Born in in 1939 Newark, Hollander has been a true traveler his whole life. At the age of 9 he moved with his family to Paris, France, where he will spend his childhood and will finish high-school. His work has brought him to many places including Thailand and Brazil.
His books have been more than successful in all spheres, and even several have been converted into movies. Hollander, being the director and/or producer has received 4 international awards for his documentary film “Riding the Rails”: MENTION SPECIALE DU PUBLIC - Deauville Festival of American Films, France; PLAQUE D'ARGENT - International Festival of Cinema Figueira da Foz, Portugal; GRAND PRIX DES MEDIAS - Journées Cinématographiques d'Orléans, France and SILVER AWARD - Houston International Film Festival, USA. Under this project Hollander is signed as a writer, producer and director. The film tells the fate of the “new poor people” in America.

You have subscribed to alerts for Neil Hollander.

You have been added to Neil Hollander's favorite list.

You can also sign-up to receive email notifications whenever Neil Hollander releases a new book.