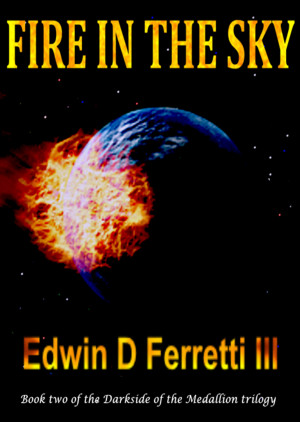 Fire in the Sky

United with Sally again, the three girls are thrust into pitched battles, forcing them to seek and use ancient magic that threatens to distort time itself. Seth gathers more allies on his side and uses them to divide the girls until one of them quits the unshakable trio.

Change whispers in the air and Jen faces a dilemma. Neith forbids the use of alien weapons against Seth and his dark army; but Seth is using his godly powers and alien technology to destroy the ancient present on Pelta, and the gods and goddesses aiding Jen, have stopped speaking to her.

Edwin D Ferretti III is a: writer, tinkerer in electronics, trumpet player and an amateur archaeologist—with a passion for ancient Egypt. He hails from Chicago, Illinois. In 1969, he graduated from the then Southwest State Teachers College, San Marcos, Texas with a BA in History. He also graduated from an advanced class from the US Air Force Academy in Foreign Affairs. After twenty-eight years of working for the United States Government, he retired and began writing Science Fiction and Fantasy commercial fiction books for the YA of Yesteryear. Currently he is finishing his DARKSIDE OF THE MEDALLION trilogy. The second book, titled FIRE IN THE SKY, is published on Smashwords. The final book, LIVING ENDURINGLY, is his current work in progress. THE HORSE OF ARTEMIS will soon follow.

Mr. Ferretti retired from a successful career as a Naval Flight Officer. He currently resides in Nebraska amid hundreds of acres of farmer’s fields with his rescued horses, dogs and cats.

About the Series: The Darkside of the Medallion 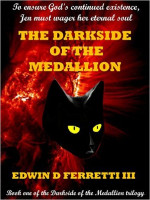 On Jen’s 21st birthday, her grandfather gives her a gold medallion that he found on a dig in Egypt many years ago: a relic that bridges 280,000 light-years, and opens a portal to continue a 7000-year-old war into Jen’s present time.

From the moment Jen touched the ancient medallion, her life changed. Visions of a battle that took place in another galaxy flood her inner view: spaceships with lasers blasting, and alien troops, advancing against a large city assault her mind. As she blinked her eyes, the mental pictures faded. The battle seemed so real; was it a glimpse into the past or in her future?

Follow Jen and her friends, in this galactic adventure, to an alien world ruled by awesome magic. Mere thoughts of the story will teleport the reader to an unknown universe and chaotic battles that can only be won with powerful magic and raw courage.

Experience the power of fire-breathing dragons as they hurdle down from the dark clouds of war and collide head on, in this epic battle of all time, with the ancient evil Egyptian god Seth and his Army of Death. Dragons? Ah yes, dragons can be sneaky; whose side are they really on?

Also in Series: The Darkside of the Medallion

You have subscribed to alerts for Edwin D Ferretti III.

Would you like to favorite Edwin D Ferretti III?

You have been added to Edwin D Ferretti III's favorite list.