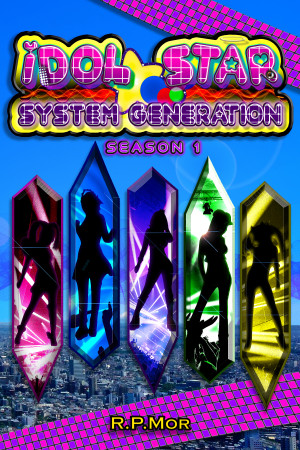 By R. P. Mor
Rated 5.00/5 based on 1 reviews
Naoko gets a chance to fulfill her dream of living by herself when she meets a cool and funny man looking for a girl to produce into an idol through his newly founded business. Experience the hilarious ups and downs of a debuting star aiming to the top of the music charts and the engaging everyday life of a friendly, video game loving, easily excitable girl who has no clue about idol-related stuff More
Fun-loving, upbeat and nonconventional sixteen-year-old Naoko can’t stand being criticized and limited by her overprotective and restrictive father anymore. Her desire to live by herself pays off while visiting an uncle in Tokyo, where she meets a tall, cool, funny and elegant man looking for a diamond in the rough – a girl to produce into an idol through his newly founded business. A friend of Naoko had fallen for a scam in the past involving a fake idol agency that almost destroyed her life, making that offer a little too risky to be trusted. Then again, that man’s small agency appeared to be associated with a trustworthy conglomerate that monopolized the idol industry. Not to mention it is Naoko’s only chance to live in a big city and be free.

Embark on a life-changing journey to the top of the music charts of the Idol Star System Generation, a megacorporation that promotes shows for talent agencies all across the country and auditions tens of thousands of girls for a spot on the limelight! Experience the hilarious ups and downs of a debuting star on the road to success and the engaging everyday life of a friendly, video game loving, easily excitable high-school girl who has no clue about idol-related stuff.

A compelling story about discoveries with a fresh and mesmerizing departure from the beaten path, full of fascinating and lovable people both under the spring sunlight and among the dazzling lights of the stages and streets of the never-sleeping capital. Seamlessly incorporating thought-provoking social, cultural, psychological and contemporary elements to a high-spirited narrative, R. P. Mor delivers an unpredictable, captivating, humorous and emotional tale of our times that is ultimately idiosyncratic, entertaining and oddly satisfying.
Download: epub mobi (Kindle) pdf more Online Reader
lrf pdb txt
Price: Free! USD
Add to Library
Create Widget
Tags: fiction japan music idol slice of life show psychologial female protag quirky and fun
About R. P. Mor

Journalist and writer, studies psychology and only regrets not having stumbled upon it sooner. Entertainment industry enthusiast, enjoys narratives from many different media, from books and movies to games, manga, Role-Playing Games and so on.

He finds it hard to write short texts and/or non-journalistic texts without witty remarks. Last time he tried to create a simple paragraph describing himself, he talked about riding a winged T-Rex. Luckily, after many tries, he managed to write something about himself that makes more sense. It's still vague, but that's on purpose.

You have subscribed to alerts for R. P. Mor.

You have been added to R. P. Mor's favorite list.

You can also sign-up to receive email notifications whenever R. P. Mor releases a new book.