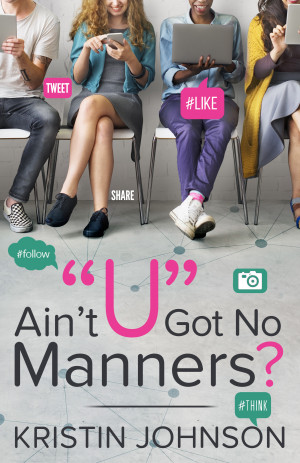 By Kristin Johnson
More than just another etiquette book, AIN’T “U” GOT NO MANNERS, a self-help book for social media users, is your go-to guide with secrets and common sense for surviving and thriving in a world that increasingly blends your online life. More
Facebook. Twitter. Cell phones, smartphones, iPads, email. The World Wide Web. The Internet of Things. SnapChat. You know and use them every day. Do you know how to use them effectively? Have you ever…

Gotten red in the Facebook?
Been defeated by something tweeted?
Regretted a SnapChat decision?
Been outmatched by Match.com?
Worried about your Selfie-esteem?

Is there a secret to living our increasingly wired life while not letting it consume you so you can live your best life offline?

More than just another etiquette book, AIN’T “U” GOT NO MANNERS is your go-to guide with secrets and common sense for surviving and thriving in a world that increasingly blends your online life. It will help you hit the #Think button, and at a minimum, entertain you with a rogues’ gallery of online mistakes. It will also call attention to the upside of online.

Besides the books on which her name appears, she has ghostwritten several books (and scripts) for clients as that acknowledge her contribution, such as ASIM: Servant of Two Masters; Mercedes; Never Marry Your Soulmate; Whites, Blacks and Whilacks; Bringing Down High Blood Pressure, and The FlavorDoctor Diet. She edited media personality Nicholas Snow’s memoir Life Positive: A Journey to the Center of My Heart. She brings her screenwriting talents to the miniseries adaptation of longtime colleague and friend DeAnn Lubell’s THE LAST MOON. She has blogged for The Happy Guy Marketing and written for numerous Web sites, e-zines and e-newsletters.

She has given well-received talks and workshops for the Desert Screenwriters Group (part of the Palm Springs Writers Guild) and was a founding member of the Palm Springs chapter of Women in Film and Television as well as a past First Vice-President and Contests and Grants Chair for the National League of American Pen Women-Palm Springs Branch.

You have subscribed to alerts for Kristin Johnson.

You have been added to Kristin Johnson's favorite list.

You can also sign-up to receive email notifications whenever Kristin Johnson releases a new book.