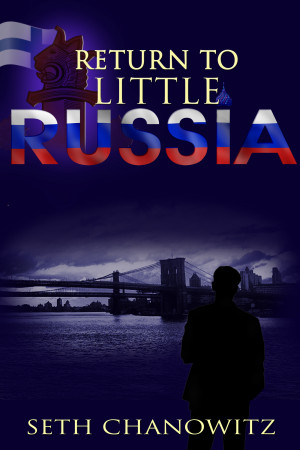 Maksim Feldblyum Issacovich, a Russian-speaking Jewish journalist working for Radio Finland born in Soviet occupied Tallinn, Estonia, is ordered to leave Finland and journeys back to his family’s home in Brighton Beach, New York (“Little Russia”). In New York City, he works for the beleaguered Immigration and Naturalization Service (INS) in Manhattan and as co-CEO of an exciting Internet start-up firm SPEEDNET New York, learns of his family’s oppression by the Soviet KGB, his future with a mysterious Helsinki-based academic named Sofia Valtonen, and discovers his life-threatening connection to a news story he reported on in 1997 detailing four dead Finnish peacekeepers in Kosovo, Yugoslavia.

“Return to Little Russia” provides great suspense and thrills when Maksim is forced to flee New York City after Albanian operatives target him. When Sofia appears mysteriously in New York and shows up in a meeting, Maksim becomes aware that circumstances are not what they seem. Who is on his side and how will he escape the violence targeting him?
Download: epub
Price: Free! USD
Add to Library
Create Widget
Tags: crime espionage new york city jewish brighton beach immigration russian refugee finland soviet jews
About Seth Chanowitz

See blog: https://schanowitz.wixsite.com/website (You can read Mr. Chanowitz's Helsingin Sanomat interview, past journalistic articles, his White House and Congressional experience, and experiences in Finland at the website/blog)

Mr. Chanowitz is the author of the internationally selling spy thriller novel, "Russia Rising", which is available on Amazon and was featured in Finland's largest newspaper "Helsingin Sanomat." His novels are also stocked in libraries in the United States and throughout Finland. He is a former intelligence analyst and journalist, who has worked at the Terrorist Threat Integration Center and the National Counter Terrorism Center. As an analyst, Mr. Chanowitz authored numerous analytical assessments for policy makers within the United States government.

Mr Chanowitz also authored numerous feature articles for“Monitoring Times Magazine” and “Satellite Times Magazine” relating to international radio and satellite broadcasting issues. For two years, he wrote and produced radio commercials for Senatorial and Congressional campaigns in Washington DC for a congressional committee. He also possess a decade of experience working for the United States government through out the US and in 14 countries in Africa and Eastern/Western Europe. His books have been spotlighted in JewishBookworld.org and Finland's newspaper Helsinkin Sanomat.

Mr. Chanowitz lives in the United States and Nordic countries, where he engages in consulting and authoring spy-related thriller novels. He has lived and worked in Helsinki, Finland. He has also worked for the United States government in refugee camps in Kenya, Ethiopia, Ghana, and at United States Consulates and Embassies in Russia, Germany, and Serbia. He has completed 40 marathons, half-marathons, and ten-milers in the United States, Kenya, and the Nordic Countries. He speaks with degrees of fluency in Spanish, Finnish, Hebrew, and Russian.

You have subscribed to alerts for Seth Chanowitz.

You have been added to Seth Chanowitz's favorite list.

You can also sign-up to receive email notifications whenever Seth Chanowitz releases a new book.