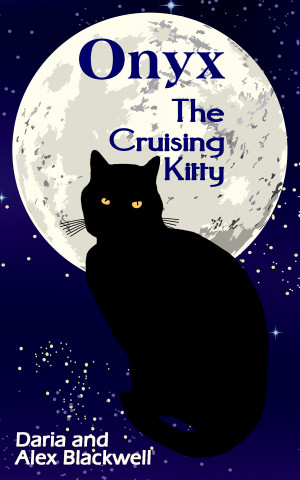 By Alex Blackwell
& Daria Blackwell
This is a collection of short stories written in Onyx' voice about her life and adventures on shore and on the high seas - you see, she really is a cruising kitty! More
"My name is Onyx and this is my story. I wrote it for the Little Peo-ple, Big Peo-ple, and even Non-Peo-ple. I hope you all like it.

I was born sometime in August, no one knows exactly when. My mother’s Peo-ple came back from their holidays to find five kittens, all girls, frolicking under the porch. They got to work calling all their friends and soon found loving homes for all of them... all but one that is. That one was moi...Onyx. No one wanted me because I was all black. All the Peo-ple who came to see me thought I was a magic cat, and they were afraid. I didn’t like them either and chose to stay with my mother.

Then one day a She-ple who was really different came. She spoke about a dream she had had about a black kitten named Onyx. My name is Onyx, and I am black. Now that was interesting. I looked her over and liked her straight away. She was different. I could feel her. She was meant to be mine, so I adopted her on the spot.

And so it was meant to be that I came to live with the Peo-ple Blackwell. I, Onyx Blackwell, was going to be a cruising kitty, and I was going to see the world in a boat.

Excuse me if I take a nap while you are reading."

(Pssssssst, I really am a magic cat. But that's another story.)

Alex Blackwell is a sailing journalist, author, and editor. He frequently writes about sailing technology and sailing adventures, contributing to several magazines, websites and e-zines, including his own, Coastalboating.net. Alex is an independent marketing and communications consultant and mentor to small companies. He is licensed as a commercial Master Mariner by the US Coast Guard.

Alex has enjoyed a professional career as copywriter, marketer and speaker. Born in Chicago, Alex and his family moved to Clew Bay, Ireland when he was 14. Because of his mother’s German heritage, Alex went to school in Germany, where he earned a Master of Science degree in Marine Biology. After starting an oyster hatchery in Ireland, he went to America for a six-month research project. As many people do, he stayed for 20 years. There he was a partner in a business-to-business and consumer marketing firm and commercial printing company, which included a book printing division.

9/11 changed everything for Alex and his Ukrainian-American wife, Daria. In 2008, they left their high-powered lives behind, boarded their boat, Aleria, and sailed across the North Atlantic braving six gales and one strong storm to resettle in Ireland. They then took a year’s sabbatical to sail along the trade winds route to the Caribbean and then back home to Ireland, crossing the Atlantic twice more.

Alex’s novels The Butterfly Effect; It started with 9/11 and The Brotherhood; Acquisition of Power are strictly fiction. They are woven out of the fabric of historical events, his personal experience, and his fertile imagination. The twist is that the plots are so plausible one might think that they are true – and perhaps they are. He has just started a third book (working title: Supremacy) in the Butterfly Effect Series. On the opther hand, Onyx, the Cruising Kitty is a series of short stories writtten in Onyx' voice, which are based on actual events.

His non-fiction books include Happy Hooking - The Art of Anchoring, which he co-wrote with his wife Daria. Happy Hooking is the best-selling anchoring book on Amazon. Following on from his work with oysters, Alex wrote the informative and entertaining oyster cookbook Oyster Delight by Jonathan Mite. It is the definitive guide to enjoying oysters. Daria and Alex have also recently released Cruising the Wild Atlantic Way. This is an informational and pictorial guide to visiting the ports, harbours and islands of the west coast of Ireland by land or by sea. It is already receiving a good deal of attention. His latest book, Self Publishing for Success - Every book deserves to be published, is the result of audience enthusiasm for his seminar on the same subject. This is planned for completion late 2016.

Alex has done the cover and interior design and layout work for the books he and Daria have written.

You have subscribed to alerts for Alex Blackwell.

You have been added to Alex Blackwell's favorite list.

You can also sign-up to receive email notifications whenever Alex Blackwell releases a new book.