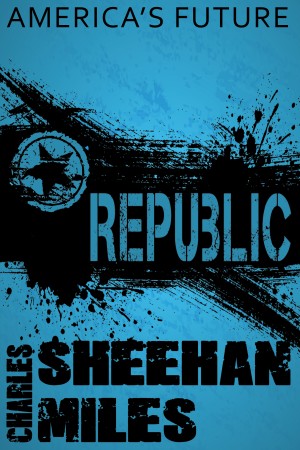 Republic: A Novel of America's Future

By Charles Sheehan-Miles
Rated 4.33/5 based on 3 reviews
Ken Murphy is a 45 year-old widower and senior manager at a computer chip manufacturer in quiet Highview, West Virginia. The local economy is thrown into a tailspin when the plant is suddenly shut down.

Murphy must fight for healthcare for his terminally ill son. As he tries to save his son’s life, he is dragged into a deeper conflict between the forces that are ripping our nation apart. More
From an author described as “one of America's criminally neglected authors,” Republic is a surprise hit described by readers as “breath-taking,” “riveting,” and “haunting.”

Ken Murphy is a 45 year-old widower and senior manager at a computer chip manufacturer in quiet Highview, West Virginia. The local economy is thrown into a tailspin when the plant is suddenly shut down.

Murphy must fight for healthcare for his terminally ill son. As he tries to save his son’s life, he is dragged into a deeper conflict between the forces that are ripping our nation apart.

In the midst of massive unemployment, an aggressive tone deaf government, terrorism and war, Ken Murphy will sacrifice everything for his family, but will that be enough?

...the blogosphere has gone wild over this book... It might scare you into doing something...for the nation, and for your future. -- Pulitzer Prize winning journalist John Hanchette, Niagara Falls Reporter

This novel of America's future may be prophetic...It will disturb you...It should. -- Kenneth J. Bernstein, Daily Kos

a fast, well plotted action story...can not put down -- Out in Jersey Magazine

Republic Video Trailer
A domestic terrorist attack evokes a violent and oppressive response from the U.S. government... a labor dispute ends in violence... a young boy lies dying of a rare disease with no hope in sight. When the conflict focuses on a small town in West Virginia, Ken Murphy, Iraq veteran and Lieutenant Colonel in the West Virginia National Guard, must find a way to protect his family and community.

Republic provides a futuristic look at the United States, while remaining realistic and relevent enough to make the reader wonder if it could actually happen. It makes you wonder just what could happen if Americans give up more and more of their freedoms, in order to feel "secure." Sheehan-Miles created some good characters, he shows their flaws and strengths. The book is well written, and keeps the reader engaged from start to finish.

'Republic: A Novel of America's Future' weighs the US Administration against the Constitution; the States against the Federal Government; the local police against the Department of Homeland Security; the National Guard against the US Army; Washington against West Virginia. The author asks which of them represents the 'real' America? And to which does the American citizen owe their loyalty? The answers may lead to a second US Civil War.

The story revolves around Ken Murphy, an Iraqi war vet, a Colonel in the West Virginia National Guard, plant manager, and respected family man, whose life is destroyed by events beyond his control. Woven within the tale, as a counterpoint to Murphy, is the life of Mike Morris, a young Army Captain, father, and unhappily married man, who unconsciously wreaks havoc on the lives of everyone around him.

The two mens lives are irrevocably changed when a small West Virginia town is left reeling from the deaths of five innocent people; the deaths being the tragic end to a series of events: a factory closure, an employee plant takeover, and the political reach of corporate power in Washington.

The book is difficult to categorize; futuristic but grounded in the real dichotomies of today's America it presents a plausible vision of America's tomorrow. It brings to mind Daphne du Maurier's 'Rule Britannia' but it's realism is starker given the current war on terror, foreclosure mess, labor demonstrations in Wisconsin, Ohio, Michigan; and the State and Federal budget woes.

The story is thoughtfully told; the main characters well drawn; the flow steady if occasionally weighed down by descriptive detail. Overall, an original and thought provoking tale.

This is not the typical type of book or story that I like. But the characters were so real I could see them and cried for them. I could see how and why the fiction could be real if we are not careful. I hated some of the characters. Like President,HDS agents. their misuse of power.I cared for a lot of the characters and none had a happy ending with so much death around them. the book was well written and I could not put it down. It wrung out my emotions. How greed and power can corrupt is scarry.

(review of free book)
Amanda reviewed on March 11, 2011
(no rating)
In all honesty I can say that this is the first military type book I've ever read and actually enjoyed. No sign of impossibly long and boring details and speeches made by so-called important people. I could easily relate to the characters and their flaws, no attempt was made to create them into almost god-like heroes and villains. I really appreciate that. Charles didnt beat around the bush when he wrote this novel. His writing style is short and to the point. No unnecessary details are included. Be warned that this book is emotionally charged. The almost abrupt epilogue only served to fuel my impatience to read his next book. I cried my eyes out by the time I finished reading this book. A "follow-up" on this novel, letting us know what happened to the survivors will be very much appreciated. I cant wait for his next book.

You have subscribed to alerts for Charles Sheehan-Miles.

You have been added to Charles Sheehan-Miles's favorite list.

You can also sign-up to receive email notifications whenever Charles Sheehan-Miles releases a new book.