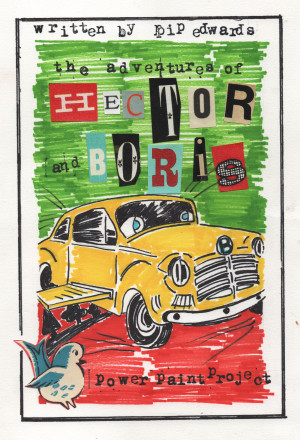 The Adventures of Hector and Boris Book 1, The Power Paint Project

By Pip Edwards
The Power Paint Project is the first adventure of Hector and BORIS. Hector is a boy who loves nothing more than having adventures with the most 'Awesomest' car in the world, BORIS. This adventure sees him helping secret agent Archie Lovell get the PPP plans back to their rightful owners and put the evil leader of OBOE Angus Burgher behind bars. Then home for tea of sausage rolls and chips.. YUM More
The Adventures of Hector and Boris are a series of children's adventure stories about a boy who gets to drive and have adventures in the most "AWESOMEST" car in the world, BORIS.
The stories are meant to be read with parents and take around 30 to 45 minutes to read, the ideal bedtime story.
The Adventures of Hector and Boris Book 1 –"The Power Paint Project"
Hector is a boy with an extraordinary secret. He gets to drive the most “awesomest” car in all the world.
The car called BORIS belongs to his family and was built by his Dad an engineering inventing genius.
Boris can fly as an aeroplane or helicopter, be a boat, or hovercraft, as well as a car and with Hector at the wheel they go on some fantastic and daring adventures.

The Power Paint Project is the invention of Professor Cheeseman an eccentric inventor. The paint he has created produces its own electrical power when exposed to oxygen in the air, and when the energy is stored in the power cells, produces enough power to run a car without the need for petrol and oil.
Professor Cheeseman however only makes 1 copy of any of his invention plans and so he puts his trust in ETS a secret security agency to get his plans safely to the factory where the paint will be made.
The evil Angus Burgher, leader of OBOE (Oil Barons of Europe.) has got word that the Power Paint plans are about to be sent to the factory, and sends his henchman Big Max off to find, and steal them so that Burgher can destroy them and make sure he still rules the world of oil.
Big Max steals the plans from Archie Lovell. Lovell, the security agent sent to deliver the plans had put the plans in his very special satchel called Bernard. Bernard was no ordinary satchel either as you will see.
A desperate Lovell finds allies in Hector and Boris and between them, and with the help of some fantastic gadgets, and some ‘snoozers’ manage to get right into OBOE headquarters where they recover Bernard, and the plans. They then fight their way out of the compound against overwhelming odds, getting the plans back to the factory safe and sound.
After all his adventuring a tired but happy Hector returns home to find his Mum cooking his favourite meal, Hot sausage rolls and chips and of course not forgetting the sauce….. YUM.

It was during the Christchurch earthquakes of 2011. My son who was 7 at the time had suffered terribly. "tell me a story he would say." so that's when it started. Hector is my son's name, and Boris was our car. He was a 1984 Mercedes 230E, and built like a tank. We often went to sit in him in the street after an aftershock, we felt safe in him, nothing was going to fall on him and if it did we figured we would be pretty safe, he quickly became one of the family. So they became the hero's of my stories. For 4 weeks we slept under our solid dining room table, and I made up the adventures of our 2 hero's, Hector and Boris and their fight against the bad guys of the world, the stories lasted for half and hour or so, just long enough for my son to fall asleep into his own little dream world away from all his problems. It was he who said I should write them down and publish them so that other kids throughout the world could have their parents tell them a great adventure before they went to bed, so here they are. I hope you enjoy reading them as much as Hector and Myself enjoyed them during those hard times.

About the Series: The Adventures of Hector And BORIS

Hector is a boy that likes nothing more than going on adventures with his best friend BORIS, the most "AWESOMEST" car in the world. Their adventures take them all around the world getting the better of lots of hardened criminals.

Also in Series: The Adventures of Hector And BORIS

You have subscribed to alerts for Pip Edwards.

You have been added to Pip Edwards's favorite list.

You can also sign-up to receive email notifications whenever Pip Edwards releases a new book.