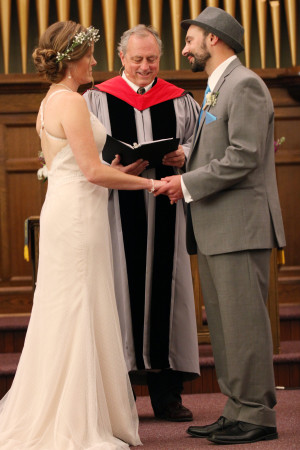 By Charles Denison
I wrote my daughter a song for her wedding day, when my son got married this summer I wrote him a book. A book of reflections on a dozen important subjects in life, after living, as the forward details, a rough, fast and fascinating life myself. (Not your typical minster, it’s a long story …) Topics include Kindness, Love, Grace, Afterlife, Money, Day to Day, Happiness, Courage and more. More
"My best friend, my favorite teacher, my mentor and bandmate, my dad has left a profound impact on me. He’s made me who I am and encouraged me to grow and strive and not be afraid to be myself. His words and his example have improved my life in numerous ways and on numerous occasions. It’s hard to even begin to put it all down.

On the night before the wedding, before dropping me off at home before the big day, my dad presented me with the most sensational wedding gift: Charlie’s Little Book by Chuck Denison (for my son on his wedding day).

That’s right. As a wedding gift, my dad presented me with a 129-page book all about what he’s learned in life and what he feels is essential to be a good man.

Considering my dad raised me, there is a lot I already knew, but there is still something to learn or something important to be reminded of every time I look through it. This is no ordinary wedding gift: it’s powerful and wise instructions on how to live and how to live right.

'Nearly 40 years ago I set out to ‘hurl myself like a spear into life with all my might.’ Now it is time to regroup and reflect. Did I learn anything? Did I find anything? This is what I learned...'"

I was fifteen years old when I made what seemed to be a reasonable decision. I had been confronted for the first time with the reality of death. A friend committed suicide. I felt the loss and frustration. I wondered then if I might take my own life. But, at least for me, suicide at fifteen just seemed – premature. What if there is something wonderful to discover in this life, and my deceased friend just hadn’t found it yet? What if it isn’t even that wonderful, but there is something to be found here, something so deeply consoling and healing, so profoundly True beneath it all, that it can make all the pain and absurdity of this life worth while, or bearable, or meaningful? That is, maybe there really is some great reason to live. And if any of that is even possible, then the Main Thing in life is to find that purpose. Or find, at least, your purpose. To die before even looking for it is just sad, like washing out to the minors without getting a single at bat. Like Moonlight Graham.

So I inwardly resolved to try everything I could in this life before giving up on the quest. I set out to throw myself recklessly into every experience life could offer me. No net, no breastplate, no landing gear. Just try it and see. I didn’t know, not having discussed such a notion with anyone, that this was something of an unusual course to pursue. Aren’t we all here to do exactly that?

I didn’t want any shields. I didn’t want to be protected from life. Admittedly, I had only been living for fifteen years. But somehow I sensed that through my scant fifteen years I had actually been alive for about ten minutes.

Life would be my teacher. I would make lots of wrong turns, meet amazing and outrageous people, embrace catastrophe, and I would pay attention. I determined to dive into this unpredictable tidal ocean of life and wear no goggles. My eyes would stay open, and for the most part, I would learn from the consequences.

That decision, at that age, led to a few problems. I became a problem. (I already was.) My poor parents were trying to protect me; all I wanted was uncensored reality.

It led to weird cults in the Catskills, midnight trysts in St. Louis, jazz in Savannah, cocaine in Cambridge, small arms in Israel and knife fights in Paris. It led to heartache and emptiness like a country song. Jackson Brown sang, “Dr. My Eyes” and I wondered with him, “Have they been open for too long?” It led to spiritual quests and physical challenges. By seventeen I was a Merchant Marine deckhand working a freighter. I lived with sensational women and Satan worshipers. I worked factories and warehouses, I dug ditches in FL and drove trucks and even, for a little while, a taxi out of Kenmore Square in Boston. I was a guest of jailers in Polk County, FL and Norfolk County, MA. I got to know doughboys from WWI and the guitar player from Fleetwood Mac. I climbed mountains and High Tension Wire Towers. I tried every drug that came along.

And there is more to life. I started to read, wide and deep. Homer, Melville, C. S. Lewis, John Irving, Dickens and Dostoyevsky, Eric Hoffer and Montaigne. I studied Greek, Latin, French and Hebrew. I read poetry by T. S. Eliot and W. B. Yeats. I read novels, non-fiction, and self-help books. And I read the classics. I planned my reading year by year. I was acquiring an education. I wanted to know what everyone thought. I read Sartre and Camus, Bonhoeffer and Emily Dickinson. I read most of Shakespeare and some Harvard Classics. I got into Jung and his disciples. I went back to school and earned a doctorate in Spirituality and Communication.

Outdoors, from Walden Pond to Big Sky, MT, I hiked trails, camped by the river, scaled rock walls, fished for trout and hammerheads, and skinny-dipped in cold mountain streams. I spent months in a cabin in New Hampshire.

I fell in love and broke my heart. I fell so hard for the mythic Girl with the Golden Hair, for a “gilded” moment I projected onto some lovely adolescent girl all the meaning, fulfillment and happiness I was looking for. I found it all! Then she wanted to try being just friends. It took me years to gain perspective on that episode. Years and Robert Bly’s Iron John.

Hippies, Jesus Freaks, the Counter Culture, the Underground, SDS, the Men’s Movement, Dead Heads, Unitarians, Benedictines, Sufis, Buddhists… yup. I was there. I grew up in what was a colorful time, without doubt. My decision at fifteen dates to 1967. The “Summer of Love.” There were plenty of alternatives to be experienced.

I worked with people throughout my career. I tried to fit (don’t laugh) into the Presbyterian Church. (Hey.) I became a pastor. While the institution constantly fought to constrain my personality and opinions, the job offered me the opportunity to talk and listen with people going through every imaginable fate. A young driver killed a seven year old boy; a promising college sophomore fell asleep behind the wheel; they found him naked and dead in the hallway in a hotel where he was not a registered guest; she’s leaving him for the guy at work, he’s leaving her for the babysitter; the escort he hired for one night fell in love and began stalking him; he never asked to be gay; she has lupus, he has aids; her son took his life; her husband forces her to have sex with strangers; could I convince her mother not to send her back to her father in TX? I learned how easy it is to make life hard – and just how hard it can get.

I knew two professional killers, and one former Army Ranger who was considering an offer for the job. Schizophrenics, Border Line Personalities, Iditarod racers, Mykonos and Santorini, drunken women and bipolar girls, overdoses, car wrecks, violent sailors, moose on the trail, snakes basking on rock walls. I have several scars, which tell their stories. Then I have a few I just can’t identify at all. I have no idea how I got that clean cut over one kidney.

… I can get carried away.

My point is, nearly forty years ago I set out to “hurl myself like a spear into Life with all my might.” Now it is time to regroup and reflect. Did I learn anything? Did I find anything?

Jump into experience while you are alive!
Kabir

This is what I learned.

You have subscribed to alerts for Charles Denison.

You have been added to Charles Denison's favorite list.

You can also sign-up to receive email notifications whenever Charles Denison releases a new book.