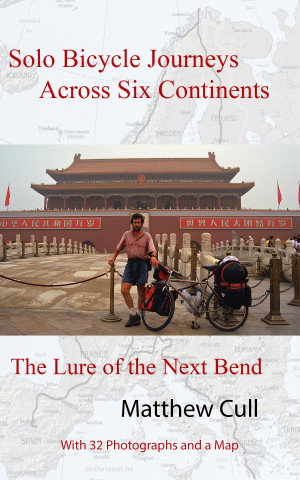 Solo Bicycle Journeys Across Six Continents, The Lure of the Next Bend

Matthew, a native of Australia, and current resident of Aspen, Colorado, USA, has spent much of a lifetime exploring the world, primarily by self powered means: cycling and walking. His journeys by bicycle have taken him through 72 countries on six continents, and his long distance hiking has taken him along the length of the European Alps and the Pyrenees.

Matthew has published two adventure narratives about several of his journeys: Solo Bicycle Journeys Across Six Continents and Hard Road to Nirvana, thoughtful and dramatic stories about hard won explorations by bicycle across the planet. He has also published six fine art photography books of candid and spontaneous photographs of people from non-western countries, under the series title, International Celebration of Culture, with individual titles: Women, Men, Kids, Parent and Child, Faith, and Marketplace. These books celebrate humanity and cultural diversity, an aspect that is diminishing as the world becomes progressively more modern. Matthew’s work places emphasis on traditional culture, activity, religion and the array of human emotion and activity within life and landscape.

When not at large exploring the world he can be often found along the trails and roads in the mountains of Colorado.

You have subscribed to alerts for Matthew Cull.

You have been added to Matthew Cull's favorite list.

You can also sign-up to receive email notifications whenever Matthew Cull releases a new book.