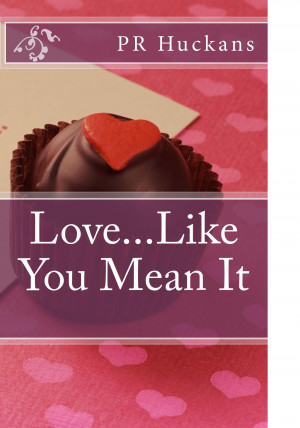 Love is not a hollow declaration from the lips, it's a resolution of the mind, a determination of the heart...it's a choice. Choose to Love...Like You Mean It!

Love is the ultimate purpose in our lives and holds the highest potential for the greatest rewards. It is a magnificent, difficult choice that'll be the hardest thing you'll ever want to get right! Join me in giving significance and depth back to such a beautiful, misunderstood, overused word that deserves so much more appreciation.
Available ebook formats: epub mobi pdf lrf pdb txt html
First 10% Sample: epub mobi (Kindle) lrf more Online Reader
pdb
Price: $1.99
$0.99 USD
Buy with coupon Use the code EBW50 at checkout for 50% off during our site-wide promotion!
(Offer good through March 13, 2021 )
Have a better coupon?
Add to cart, then apply your coupon
Add to Library Give as a Gift (using coupon)
Have a better coupon?
Add to cart for gifting, then apply your coupon
How gifting works
Create Widget
Tags: romance inspiration relationships humor devotion love letters advice
About PR Huckans

PR Huckans was born in California in 1971 on a U.S. Naval base. He grew up in Maryland and spent some time back east and has lived in and traveled over most of the central and western United States, Fiji, Tahiti, Australia, and Hong Kong to name only a few. He was born to parents who were both in the Navy. He attended college at Colorado State University followed by the dental program at University of Colorado Health Sciences Center Denver. He moved to New Mexico in 1997. He worked with a wonderful woman whose husband died suddenly, leaving her with three small children. In 2002 when the children were aged 5, 8 and 10 years old, he married that wonderful woman, who had become his best friend, and they have worked together, played together and traveled together ever since. They are currently enjoying spending time with their grandchildren and traveling this beautiful country that surrounds us.

PR enjoys anything and everything outdoors. He is an avid bird watcher and hiker, biker, kayaker, etc. Nature brings him closer to God. He joined the church in adulthood and sincerely wishes that others would recognize the joy, power and need of having faith in our savior. His books reflect everyday behavior that can be used to regain this country&#39;s morality, decency and hope.

You have subscribed to alerts for PR Huckans.

You have been added to PR Huckans's favorite list.

You can also sign-up to receive email notifications whenever PR Huckans releases a new book.