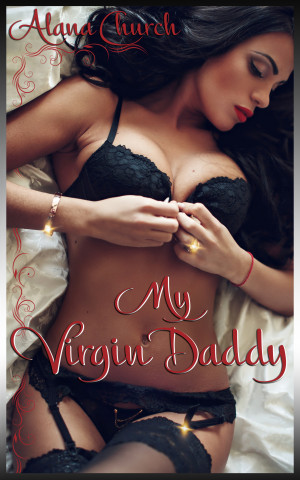 Charlie was shivering with pleasure and fear. This was not what he had imagined his first time would be like. Rather than the culmination of weeks of planning after a wedding, he was being seduced by his dead wife's daughter. His eyes feasted on her incredible body, seeing for the first time what he had known unwillingly. Long, slim legs melded into a pair of subtly curved hips, the white lace of her high-cut panties emphasizing her slender waist. Above, her stomach was flat, the dimple of her navel winking at him saucily. The delicate fan of her ribs morphed irresistibly into the lovely curves of her breasts, standing out high and proud from the wall of her chest, obviously not needing the negligible support of her filmy bra.

“Thirty-six C,” she said, catching his look. “A little smaller than Mama's, but then,” she shrugged, “I haven't had any babies yet. They'll probably get a bit bigger when I do.”

“It's all right, Charlie,” she said. “Men like to know.” She stepped closer, until he could feel the heat of her body. “Would you like to go to my room?” she asked quietly.

She shook her head. “Too many memories. I know Mama never slept with you there, but…it would still feel like I was trying to take her place.

Greatly daring, Charlie laid his fingers across her full, kissable lips. His heart was hammering in his chest. Slowly, carefully, he enfolded his stepdaughter in his arms, until their bodies were pressed together. He could feel her soft curves against his bare chest. His arousal was an iron bar inside his slacks, pressing against her bare belly. Jasmine didn't flinch away. Instead, she made a low, growling noise deep in her throat, and her hands reached around him to grab his ass, pulling them even closer together.

Her eyes, when they met his, were shining. “Are you ready?”

Born and raised in Illinois, Alana attended the University of Illinois at Urbana-Champaign, graduating with a degree in Education in 1994. She soon found out that the teaching life was not for her, and after a series of adventures has settled down in the Chicago suburbs, where she works for a telecommunications company.

About the Series: Twisted Passions

Reviews of My Virgin Daddy by Alana Church

I love the idea of this being set in San Antonio, TX and that both mother and daughter are Latinas. Another major hook (unusual in my experience for premises) is that the guy the mom falls in love with is a computer geek and a virgin--but he's a good guy.

There's a slow burn for Elena her love, to her getting to know him, which leads up to their wedding. She reels him in and she's patient with him, and learns to accept his quirks. Only thing is the sudden, unexpected occurrence that shocks everyone and what happens next.

I love the idea that although Jasmine is obviously much younger, the "mom" gives her permission to seduce Charlie--and before this, Jasmine learned to cook well and found it relaxing to her--so she learned to domesticate her wild side. She seduces Charlie and she does it pretty well. It's sweet and enjoyable to read.

All I would say is that I hoped the time Jasmine and Charlie get to know each other were longer, although I understand why it isn't that way. In my mind, this book begs for a sequel since there's one experience Jasmine and Charlie share that I think fellow connoisseurs of this kind of story would agree we would love to see more about, where they have their own story.

This is certainly worth reading and having in your collection!

You have subscribed to Smashwords Alerts new release notifications for Alana Church.

You have been added to Alana Church's favorite list.

You can also sign-up to receive email notifications whenever Alana Church releases a new book.