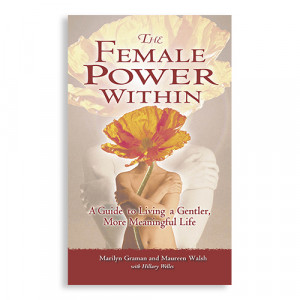 The FEMALE POWER WITHIN

By Maureen Walsh
Many women have achieved goals, personally and professionally, that our mothers and grandmothers could only dream of. We head corporations, compete in marathons, hold elected office, lead expeditions, write prize-winning novels, run universities, and in some cases raise kids as well. We're so busy, in fact, that we often don't even have time to ask ourselves, "Is this what I want to be doing? Am I More
DISCOVER THE EXTRAORDINARY POWER IN BEING FEMALE

Many women have achieved goals, personally and professionally, that our mothers and grandmothers could only dream of. We head corporations, compete in marathons, hold elected office, lead expeditions, write prize-winning novels, run universities, and in some cases raise kids as well. We're so busy, in fact, that we often don't even have time to ask ourselves, "Is this what I want to be doing? Am I happy in my life? Is this it?"

In this rich and reassuring book, psychotherapist and creator of Life Works programs, Marilyn Graman, and her longtime associate, Maureen Walsh, give you the opportunity to ask these questions at last. You'll look at the cost of striving for power and success on male terms and discover what a truly successful life would be for you if you could define it for yourself. In short, you will discover that incredible power of being female.

Dozens of original "uncoverings" and reflective questions will help you see how you've been measuring yourself by "scorecards" that don't make sense for you and get so clear and grounded in mind and body that the life you want just begins to flow toward you. The adrenaline rush of struggling and competing and never feeling centered and peaceful will simply lose its appeal as you open up to the magnificent power you already have within you.

As you begin to relax into your female power, you will be amazed at how much energy you liberate for making wise choices, receiving all the good there is to be had, drawing wonderful people toward you, and just plain having fun.
Download: epub mobi (Kindle) pdf more Online Reader
lrf pdb txt
Price: Free! USD
Add to Library
Create Widget
Tags: women empowerment empower women
About Maureen Walsh

Marilyn Graman is a psychotherapist with a thriving practice in Manhattan’s Greenwich Village. Marilyn began teaching self-development workshops in 1974. In 1984, she and Maureen Walsh founded what is now Life Works Inc.,dedicated to offering workshops, seminars, retreats and intensives to support people to have more of what they want in life.

Marilyn’s well known "Having What You Want With A Man Workshop" has been featured in The New York Times, Glamour and Elle magazines, and she has developed curriculums for numerous courses for both women and men, supporting the process of living a life of meaning and fulfillment.

Graman has appeared in the media as a relationship expert and lectures regularly throughout the country. A graduate of Queens College with a Masters degree in early childhood education from City University, Graman says she learned most of what she knows about human beings in her 12 years as a kindergarten teacher in New York City. Her long-range intention is to work with children again.

Maureen Walsh is called a business therapist by her clients and is the co-founder of Life Works Inc.,one of her many collaborations ranging from movie and event production to real estate ventures with her husband, William Speers.

No stranger to walking in many worlds, Maureen earned an undergraduate degree in art history and held graduate fellowships in the theatre department and business school, while studying for her marketing MBA. Her subsequent work in advertising grew into her own consulting firm helping New York artists and healers evolve into successful business owners.

Maureen’s extensive work in the arts officially began with managing the Philadelphia Company, a theater company devoted to staging new American plays. She was the Marketing Director of The Children’s Theater Company in Minneapolis, the nation’s premier theater for kids; the Brooklyn Academy of Music and the Joffrey Ballet.

A producer at heart, Maureen guides the development of new projects, creates and delivers specialized courses, and is the business side of Life Works And Publisher of our books. She designed Life Works’ How To Make A Graceful Living course to help people find authentic work. Her most recent course, Reboot Your Life, encourages Boomers to take a new look at retirement.

Life Works Books is the publisher of Marilyn Graman’s and Maureen Walshs’ first book "The Female Power Within: A Guide to Living a Gentler, More Meaningful Life," applauded by Arianna Huffington as “a groundbreaking exploration of the nature of women’s power.” Their second book, "There Is NO PRINCE and Other Truths Your Mother Never Told You," was released on Valentine’s Day, 2003."How to Be Cherished - A Guide to Having the Love You Desire," was published in 2004. "26 Weeks to Love - How to Find Him" will be published in early 2012.

You have subscribed to alerts for Maureen Walsh.

You have been added to Maureen Walsh's favorite list.

You can also sign-up to receive email notifications whenever Maureen Walsh releases a new book.