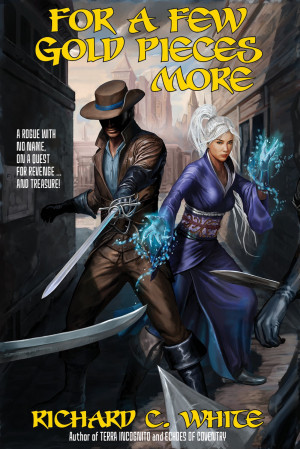 For a Few Gold Pieces More

By Richard C. White
A Rogue With No Name travels a fantasy realm in search of treasure, adventure, and romance—and to track down the woman who sent him to prison for a crime he didn't commit (but she did). Think Lords of the Rings meets the "spaghetti Westerns" of director Sergio Leone, with an adventurous twist! More
For the right price, he’ll get you out of trouble. Cross him, and you’ll never pay enough.

It’s amazing what you learn, living on the run.

Fleeing for my life, convicted on trumped-up charges, and denied the use of my own name, I’ve stayed one step ahead of the Imperial Guard by focusing on one thing: taking care of myself first. So, I don’t know where you heard the ridiculous rumor about me helping people here and there around the Empire. And if, and that’s a big if, it was me, there was something in it for me. Trust me on that.

In the various towns and villages I’ve visited over the years, I’ve seen depravity, cruelty, torture, greed, lust—and that’s just the humans. Trust me—compared to them, the creatures that haunt the edges of the Empire are more honest and trustworthy. At least they’re not trying to slip a knife into your back . . . usually.

Only a few things have been constant while I’ve been on the run. My desire for revenge against the person who framed me all those years ago tops the list. Weird things happening in quiet villages, dark forests, or icy mountains never seem to change. And third? Well, that would be my luck.

I can always count on it to be bad.

Richard C. White is the author of the nonfiction writers' reference book, Terra Incognito: A Guide to Building the Worlds of Your Imagination; the novels Gauntlet: Dark Legacy: Paths of Evil and Star Trek: SCE: Echoes of Coventry; the fantasy comic book The Chronicles of the Sea Dragon Special; and the graphic novel Troubleshooters, Inc.: Night Stalkings. His short fiction has appeared in such anthologies as The Ultimate Hulk, Star Trek: Corps of Engineers: What’s Past, Star Trek: The Next Generation: The Sky’s the Limit, and Doctor Who: Short Trips: The Quality of Leadership.

You have subscribed to alerts for Richard C. White.

You have been added to Richard C. White's favorite list.

You can also sign-up to receive email notifications whenever Richard C. White releases a new book.