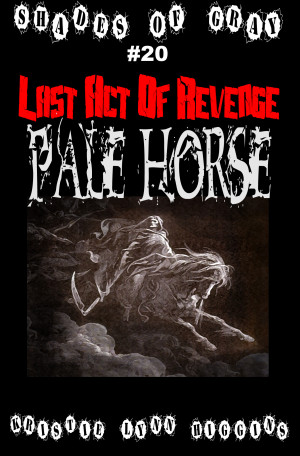 Kat searches for clues to her past while androids called Un-Men and human bounty hunters try to kill her, and Kim searches for who murdered her mother. The two women's paths collide, and they form a shaky partnership to unravel the mysteries that haunt their lives and they try to protect one another from those who do not wish for them to discover the truth.

Everyone's soul is marked by a color. Which shade of gray will they hold to?

Kimberly's craft comes to its conclusion.

A doom was looming over the planet, a great darkness that could bring about the Closing of Days. Two women would be brought together... One was a legal assassin or Life Closer known as the Phoenix and the other was an experiment known as the Pandora Project who would either bring about a Twilight that would be the first rays of dawn or a Twilight that would usher in the darkness forever. Follow these women as their paths cross.

Noir was a mega-city plagued by a sun blocking mass called Dry Clouds that had mysteriously appeared three decades earlier. Dry Clouds covered half the planet and forced those living under them to live in endless night. On this world, corporations were in charge and breaking your contract with them could mean the termination of your life. Kimberly Griffin, a Life Closer existed in a world of death. She closed people for a living. It was a lonely demeaning existence, though she wouldn't admit it. There was nothing to drive her in the bleak reality until one day she ran into Kat, aka the Pandora Project, who was hunted by bio-mechas called Un-Men. Kat was an experiment of the Sphinx Corporation and they tested her to see if she could be the ultimate weapon.

You have subscribed to Smashwords Alerts new release notifications for Kristie Lynn Higgins.

You have been added to Kristie Lynn Higgins's favorite list.

You can also sign-up to receive email notifications whenever Kristie Lynn Higgins releases a new book.