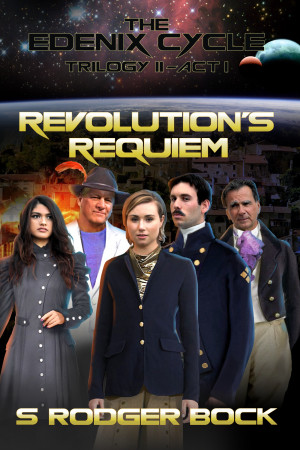 Also in Series: The Edenix Cycle

Loved the read and enjoyed the character development along the way! Excited to see the next chapter, hear more backstory, and see how characters transform. Loved the action of the civil unrest as the backdrop to the story. As a fan of the first three novels it was really cool to jump in time in this book and see how the good intentions and plans of the original books had been corrupted a century later. Action sequences well done! Well written.

(reviewed the day of purchase)
Rburks reviewed on March 12, 2017

An entertaining, engaging story that kept me on the edge of my seat. Characters you'll grow fond of with stark, contrasting personalities. Full of irony that parallels our current times. This book keeps turning right up to the powerful, fantastic ending I didn't see coming.

(reviewed the day of purchase)
Blondejedi reviewed on March 12, 2017

A breathtaking journey that feeds the imagination and leaves you waiting for more. It drew me in as I watched the characters grow and adapt to the constantly changing environment around them. As I read of the mistreatment and injustice I began to feel my blood boil and yearned to join in the righteous fight alongside the characters. A masterpiece full of intense action, tender moments, vivid landscapes, and thrilling adventure.