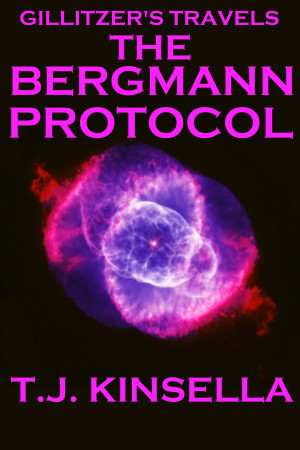 T.J Kinsella is a writer from the south coast of England. A former researcher in Artificial Intelligence, he has a life long passion for all things Sci-Fi and is great fan of short stories, particularly those of Philip K Dick.
T.J. began self-publishing his work in early 2017 and, since then, his stories 'Point of Origin' and 'The Returning Hero', have been published respectively, in issues #3 and #4 of the sci-fi, e-magazine, 'Just a Minor Malfunction'.
When he's not at his keyboard, he can be found watching his beloved football team, AFC Bournemouth, or playing the drums, (badly!).

About the Series: Gillitzer's Travels

Captain Gillitzer and his crew travel into the past in a daring attempt to retrieve an infamous historical figure. However, after becoming beset by bad fortune, completing the mission becomes the least of their concerns. Follow the misadventures of the unluckiest time-travellers in history...before they change it!

The ending is not the surprise the author intended.

The story does not flow well, everything is off balance, often I am trying to figure out why this or that is happening (lack of context).

It feels like the author had a great idea for an ending, then put a bunch of words before it to make a story.

A chunky piece of writing, I liked it. I liked that it had an ending. If there was one line that needed editing, it would be:

"For the first time since the crash, the captain aloud himself a slight smile."

You probably meant to say "allowed" himself a slight smile.

"For the first time since the crash, the captain allowed himself a slight smile."

Grammarly speaking, you might want to lowercase the "Said"s' after character speaking. it's a personal choice if you want to capitalize after speaking: "I know this sentence." said him

I'm guilty of releasing with incorrections, it's okay. We don't have editors. Keep writing. I was able to understand the science fiction. I enjoyed that I "got it", and was able to follow along with the time travel-verse.

You have subscribed to alerts for T J Kinsella.

You have been added to T J Kinsella's favorite list.

You can also sign-up to receive email notifications whenever T J Kinsella releases a new book.