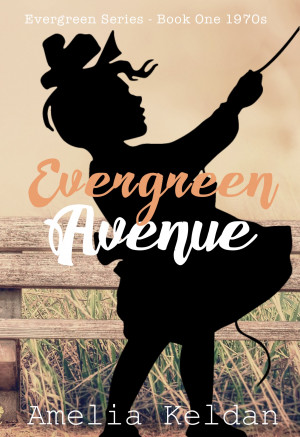 Her mysterious talent is both a burden and a blessing, sometimes helping her to understand those around her, whilst also filling her brain with confusion and fear.
When her family leave the city in favour of the green and idyllic Adelaide Hills, she is initially optimistic that the move will be a positive change for them all – instead, it raises questions that no one seems able to answer.

Who is the sad man that haunts her dreams?
Why is her Mother filled with so much worry and pain?
Why, during a housewarming party that was supposed to fill the house with merriment and joy, does Tildy sense nothing but heightened emotion and impending disaster?

Amelia Keldan is a women’s fiction writer, full time Mother and lover of all things vintage. When not reading and writing, you can find her trawling through second hand stores, re-furbishing old furniture and creating playlists on her iPhone.
Amelia grew up amongst the foothills of South Australia and now resides in a beachside suburb, which helped to provide the setting for her latest stand-alone novel, The Memories of Misty. Her next novel, The Arrival of Amber is due in 2019.

About the Series: The Evergreen Years

A saga spanning four decades, the complete story of the McVee family takes us through the free-wheeling 70s, the tumultuous 80s, the self-conscious 90s and the beginning of a new millennium. Everyone has their part to play in each other’s lives - even those who have since crossed over to the other side.

Also in Series: The Evergreen Years

Promoted as a women’s fiction with supernatural elements, this slow burning novel is full of mystery and family drama. Let this story take you back to the seventies.

Set in 1970’s Australia, Penny and Russell McVee make their move back to Adelaide Hills along with their three children: Joel, Simone and Tildy. Their youngest of six years keeps having visions of a crying man. A man she later on discovers might actually be real. Meanwhile, her parents are meeting up with old friends and acquaintances, as they have moved back to their old neighbourhood. But it seems that Penny might be hiding a secret of her own. And everything might come to light during a housewarming party.

The case of the sad man is subtly introduced in the first chapter and further expanded on in chapter two. It is considered to be one of the main story lines when reading the blurb. But there are many more secrets and personal issues handled within the stories featuring other characters. Also, not all issues that are touched upon are resolved by the end of the book.

The first few chapters take some getting used to the many points of views and the different characters that are introduced to the reader. For instance, the prologue introduces to us the dramatic setting of a psychiatric hospital, and our interests are stirred. We all wish to know what’s going on with the “weirdo” in room 201. Skipping forward a couple of years from the sixties to the seventies, the reader then follows the McVee family members, including reminiscences and flashbacks of these characters.

With many details that create ambiance and that depict the characters in physical detail in the reader’s mind, Amelia describes the feelings of the characters and their inner turmoil, rather than the events themselves. This book is more about the experiences of the people than the experiences itself and a perfect example of family drama - not just the McVee family but also other families from their neighbourhood.

Apart from the family history and drama, Amelia made use of intertwined plots. Secrets are sometimes shared between characters. The perfect front shown at the start of the tale makes place for a more realistic and imperfect family depiction.

Although the story counts just 170 pages ( eBook format), it is a slow burner. The start will allow many introductions and everything ebbs gently towards the McVee’s party. from that point on, events start to unfold and become clear and the story takes up more speed. However, because many of the items that come forth in this book are revelations of secrets or character backgrounds, it’s hard to expand on these events without giving too much plot away in this review.

The story has been compared to Celeste Ng's Little Fires Everywhere mixed with cult TV show This Is Us. Add some supernatural suspense and you have Evergreen Avenue. The emphasis lies on the family drama and history. If this has your interest, or if you’re charmed by any of the mentioned aspects of the story above, then this story is one for your list.

You have subscribed to alerts for Amelia Keldan.

You have been added to Amelia Keldan's favorite list.

You can also sign-up to receive email notifications whenever Amelia Keldan releases a new book.